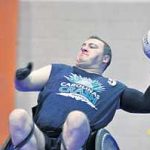 The ear-arresting sound of metal crashing into metal filled Squire Recreation Center in Danville as men in Mad Max-style wheelchairs slammed into each other during quad rugby games Saturday.

“It’s a mix of basketball, football and bumper cars, because we do run into each other quite a bit,” said Greg Taylor, a quad rugby player.

Athletes from the Carolina Crash of Charlotte, the Raleigh Sidewinders and the East Coast Cripplers of Virginia Beach played at the center most of the day Saturday. The final game featured the Crash versus the Sidewinders. The Sidewinders won 20-11.

Ben Huggins said he organized the event as part of his internship with Danville Parks and Recreation. Quad rugby has been an interest of his after he saw “Murderball,” a 2005 documentary that introduced the sport and its athletes to an international audience.

The sport showcases the abilities of the athletes who play it and everything that they have accomplished. Huggins said those are reasons he brought the sport to Danville.

“Once you see them hit that first time, you look at them more as athletes, instead of someone in a chair,” Huggins said. “That’s really what I want people to get out of it in the end.”

The sport lets them smash stereotypes, said Justin Richardson, of the Sidewinders, as he riffed off the slogan of the United States Quad Rugby Association.

“You think about quads, the first thing that comes to mind a lot of times is people that can’t function much,” Richardson said. “The sport helps kill those stereotypes that we’re a bunch of people sitting around collecting Social Security.”

Greg Taylor, of the Crash, said that sometimes the disabled are seen as fragile.

“We’re out here proving that we are capable of playing sports, and enjoying it,” he said. “Getting out here, hanging with the rest of the guys and enjoying life in general.”

Richardson said he couldn’t wait to play quad rugby for the first time four years ago. He helped put the team together in Raleigh and has been a team captain every year.

He was a competitive swimmer and diver before his injury. Richardson dove into a pool one day as he had a hundred times before.

He hit the stairs at the bottom, injuring his spinal cord at the C6-C7 level.

He said the injury was shocking at first. He got used to his wheelchair and regained some function. He said he was getting used to his life after the accident.

“And then all of a sudden you find quad rugby, and it’s like now everything is back to normal,” Richardson said. “I found myself again through athletics.”

He said the sport brought something back that was gone from the time between his injury and when he started playing.

“Quad rugby has been huge for me the last few years,” he said.

Taylor has played quad rugby for 13 years. He said the sport taught him a lot about himself and what he could do after his accident.

He injured his spinal cord while mountain biking 15 years ago. Taylor said he hit a patch of mud while going downhill, which sent him over his handlebars. He is classified as a C6-C7 quadriplegic.

“It was great to get back out there and find that I could play sports again,” Taylor said. “My body’s trying to tell me to quit. I’m getting a little old for this, but I’m still having a lot of fun.”

He said the sport helps keep him in shape, and he trains regularly.

Richardson and Taylor said rugby gives them the chance to meet people in similar situations and brings the camaraderie of a team sport to everyone that plays.

“That’s one of the great things about rugby is that I’ve met so many people all over the country and a few people from far reaches of the planet,” Taylor said.

He’s played with athletes from New Zealand and Australia.

The rules blend those of hockey, basketball and football, Richardson said. The sport is full contact and chair positioning on the court is similar to wheelchair basketball. There’s also a penalty box.

Huggins, who organized the event, said that four players are on the court at one time.

“Basically, you just try to cross the goal line without getting knocked over or having the ball ripped out,” Huggins said.

Quad rugby also has other rules about how long you can hold the ball, getting the ball up the court and the types of wheelchairs that players use.

The athletes are classified from .5 to 3.5, Richardson said. And the total classification of all four players on the court can’t be higher than eight. A high functioning player would be classified as 3.5.

“It has more to do with muscular function because all of our injuries and disabilities are different,” Richardson said.

After the game, he sprayed himself with a spray bottle filled with water to cool off. Other players unwrapped the tape around their forearms and helped each other switch into their other wheelchairs.

The crowd slowly trickled out into the hot July sun. Some went to the Danville Braves game, others headed home.

Para-football gave Colin Shields ‘something to work towards and enjoy’