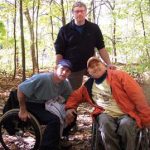 K. Eric Larson and a few pals had planned a mountain climbing trip to Mount Rainier when the idea hit him: turn the trip into a fundraiser for spinal-cord injuries and call it “Climb for a Cause.”

Larson, a graduate of Henry-Senachwine High School, had a public-relations business in the Chicago area with a niche in hospitals and health care. He’d also been volunteering for the National Spinal Cord Injury Association, that readily agreed to the fundraiser and accepted nearly $15,000 when he returned from Seattle.

“That climb had a lot of impact on me personally. It was the most physical thing I’d ever done,” Larson said. “I thought, ‘I want to do something more with this.’”

Larson went back to NSCIA and pitched a new program: training the disabled to go canoeing, camping and rock climbing. With trained guides and special equipment, he figured, people in wheelchairs also could climb mountains, literally and figuratively.

The first candidate was a paraplegic who had enjoyed the outdoors before hurting his spine in a 1981 fall at the University of Illinois. Pat Maher, who later asked Larson to stand up at his wedding, descended from the mountain and wondered aloud why he hadn’t pursued his favorite hobbies in the nearly 20 years since his injury.

“And we realized, at that moment, that was the point: when people acquire a spinal cord injury, the typical response for that person — and, unfortunately, everyone around them — is to close doors,” Larson said. “The joy of the program is to see them climb an 80-foot cliff and then say, ‘Gee, if I can do that, I guess I can apply for a job.’”

Larson and Maher’s program became known as “Moving Mountains” and it has served hundreds of individuals who have spinal cord injury or disease (SCI/D). It also prompted NSCIA to make Larson its executive director this past October.

Maher described Larson as a natural leader who gets others to share his passion, think creatively and bring out the best in themselves.

“Eric’s a very good friend,” Maher said. “He’s quite literally carried me on his back. I’ve had to place some real trust in Eric.”

Larson, 49, was born in California to a career Army officer from Hennepin. Typical of Army families, the Larsons changed ZIP codes frequently — K. Eric’s two younger brothers were born in Germany — before father Lloyd retired and moved the family to a farm in Putnam.

“It was a big change,” Eric Larson recalled of moving to Putnam County at age 10. “For as much as I was moving from one community to the next, that was the first time I’d lived out in the country.

“But I loved every minute of it,” he added quickly. “I appreciate it more every year: having all those years on the farm.”

Frequently moving taught him to be adaptable, a quality that would serve him well after graduating from Henry-Senachwine in 1978 and leaving for Southern Illinois University in Carbondale.

Larson was a good student with a love of science fiction books (favorite author: Isaac Asimov) and an aptitude for science. He considered majoring in zoology and agriculture at SIU and then breeding sheep as a career — until a professor assigned him to keep a journal as a college writing project.

“I could write, but I hated it,” Larson said. “But for some reason it kind of clicked. I started writing the journal, and it was fun.”

Larson shifted his focus from science to speech communications, focusing on public relations. A girl he was dating got him interested in the Public Relations Student Society, of which he became president, and the America and Pyramid Public Relations, SIU’s first student-run PR firm.

The hottest market for PR men at that time was health care — hospitals had begun actively marketing their services in a competitive health-care market — and the sci-fi reading Larson needed no encouragement in testing the field.

He landed his first full-time job at Christ Hospital and Medical Center in Oak Lawn and then worked in the Chicago office of Burson-Marsteller, whose client list included Merrill Dow Pharmaceuticals and Northwestern Memorial Hospital. Larson remains settled in the Chicago area, residing in suburban Sleepy Hollow with his wife, Margaret Williams, and their 8-year-old daughter, Madelaine.

His interest in spinal cord injuries began after launching his own PR firm: Larson Communications Group. One of his clients was a tri-athlete who survived a nasty cycling accident and spent three terrifying days in a hospital thinking he might not walk again.

The client made a full recovery, but not before working the phones and discovering how hard it was to find groups and services willing to help people with spinal cord injuries. He became a volunteer board member for NSCIA and hired Larson to promote a local conference.

Larson himself became a volunteer for NSCIA and within 10 years became more passionate for the cause. He first served as director and president of NSCIA’s Illinois chapter, Spinal Cord Injury Association of Illinois. Under his watch, the Illinois chapter was recognized as NSCIA’s Most Outstanding Chapter nationwide for three out of four years. Five years ago he was elevated to director of operations and chief operating officer, and was a member of the Governing Board of Directors and chaired the executive committee.

One of Larson’s hires was Bill Fertig, a former police officer who hurt his spine in an off-duty motorcycle accident. Fertig works for NSCIA’s resource center from his Pennsylvania home and credits Larson for establishing the “virtual office” he and his peers use to communicate from across the map.

“Eric has a talent for focusing in on how to get things done and to think outside the box as to how to do things more quickly and efficiently,” Fertig said. “I was hired to work for him, but I consider him a friend because of the trust he’s put in me while at the same time requiring me to step up and function at a higher level.”

Nine months ago, Larson was named cxecutive director and chief executive officer. Along the way, he had to give up his lucrative PR firm; but he called the decision a “no-brainer” and said he’s never looked back.

“I’m certain I’d have more money in the bank,” he allowed, “but I’m equally certain that I’d be less fulfilled as a person. It’s definitely been worth the tradeoff.

“In my heart, I know I’ve gotten as much out of the program as anybody.”

The Pope and Parkinsons – (Stem Cells)

Only 11% of US population opposes Stem Cell Research