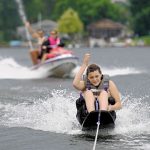 “It’s all kind of freedom on those skis,” said Mark Bugha, 28, from Finleyville in Washington County. “It’s special for me because I never experienced that kind of freedom before.”

Mr. Bugha has cerebral palsy, a neurological disorder, and has used a wheelchair all his life.

“Any time he gets out of that chair, it’s good for his back,” said his mom, Norma. “He doesn’t feel disabled when he’s doing these things.”

This is the 19th year that Three Rivers Adaptive Sports has held a water skiing clinic at Conneaut Lake in Crawford County; it’s the 17th that Mr. Bugha has attended.

Three Rivers Adaptive Sports offers many athletic and outdoor activities for people with disabilities but the water skiing clinic, held this year July 20-23, is the most popular, said Mark Kulzer, 51, president of the nonprofit.

“Water skiing is therapeutic in a lot of ways — for strength, balance, endurance … and it’s a lot of fun,” Mr. Kulzer said.

“It’s fun,” agreed Claire Senita, 17, of Richland, who sustained a spinal cord injury three years ago in a gymnastics accident. “It’s nice to get out on the water.”

“I like it that she can get out and do some of the things we would have been doing anyway if she hadn’t been injured,” said Claire’s mom, Emily.

“Getting out and doing something able-bodied people do is great,” said Chad Schaffranck, 34, of Lilly, Cambria County, who had a spinal cord injury in an automobile accident. He’s been part of the ski clinic for 14 years. “For me, it’s the thrill of speed and independence. It’s also the camaraderie. You meet other people with disabilities. It’s like a big family.”

“It’s a great group of people,” agreed Don Crago, 48, of Coitsville, Ohio. “I like water activities. This adds to it. It’s an adrenalin rush.”

The clinic is labor intensive, and the labor — including Mr. Kulzer — is all volunteer. By day, Mr. Kulzer is a recreation therapist for ReMed Recovery Care Centers, with a Pittsburgh office in Shadyside.

“We’ve got about three volunteers for each handicapped skier,” he said.

Once a skier goes out, there are seven volunteers looking after him or her. There are three on the tow boat — one driving it, a second operating a radio to home base, and a third closely monitoring the tow rope and the skier.

“For some of these [adaptive] skis, the tow rope is attached to the ski rather than held by the skier, so they can’t just let go,” Mr. Kulzer said. “So the guy in the boat has to release the rope if the skier falls.”

If the skier does fall, there are two pairs of people on personal watercraft (jet skis) trailing him or her. One of the jet skis will go to the assistance of the fallen skier, with the rider jumping into the water to help him or her get back up. Once the skier is back up, the other jet ski will trail him or her while the rider who jumped into the water to assist gets back on the other. They leapfrog.

Most of the volunteers are physical therapists such as Marsha Logan, 44, who has volunteered at the clinic for all 19 years. Many of the others are relatives of the disabled.

“I work in rehab,” she said. “To have people able to participate in activities with family and friends is our ultimate goal.”

It costs Three Rivers Adaptive Sports about $5,000 to put on the clinic, Mr. Kulzer said.

“UPMC underwrites a substantial portion of it, and we get contributions from individuals and businesses,” he said.

The person most responsible for getting the water ski clinic started is Barbi Baum, 50, of Mount Lebanon, who received a spinal cord injury in an automobile accident at age 14.

“I liked sports before my disability,” she said. “I used to come here (to Conneaut Lake) as a child. As soon as adaptive skis were available, I suggested the program to Mark.”

There were five people at the first clinic, Ms. Baum said. This year, despite cool and rainy weather, there were 50.

First steps on a long road