‘You’ve got to keep going’ 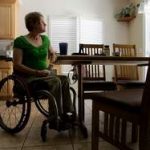 One of the annoying things about life with two paralyzed legs is time, Jill Mason said.

It takes hours to get up, to shower, dress and fix something to eat, the daily routine that an able-bodied person — like the competitive triathlete Mason used to be — could accomplish in minutes.

In the five years since a drunken driver smashed into her bicycle on Highway 12 near Oakmont, severing her spinal cord, Mason, 31, has gotten faster at these mundane chores, but they still take an entire morning.

“Is that real time or Jill time?” her brother, Daniel, teases Mason about her turtle pace.

Jill Mason, who rides a hand-powered bicycle around her Sacramento home, swims the backstroke and has gone kayaking, skiing and even rock climbing, embodies the challenges — and successes — of a person living with a spinal-cord injury.

She is among the 259,000 Americans whose injury has immobilized their legs (paraplegics) or all four limbs (quadriplegics), a loss that remains, for now at least, irreversible.

Honza Ripa, 18, became a quadriplegic in a swimming accident on the Russian River at Healdsburg on June 13, just two weeks after he graduated from Healdsburg High School.

Damaged nerve cells in the brain and spinal cord do not often heal well, if at all, and potential therapies, such as stem cells, are “quite a way off,” said Dr. James Neel, a rehabilitation specialist who treats spinal-cord injuries at Memorial Hospital.

About 12,000 people a year suffer spinal-cord injuries: Most are male, the average age is 40 and vehicle crashes are the most common cause.

But life expectancy for people with spinal-cord injuries is increasing. A 20-year-old who survives for a year after becoming a quadriplegic can expect to live nearly 37 more years, compared with 59 years for a person with no spinal-cord injury.

The costs can be staggering, amounting to more than $3 million in health care and living expenses over the lifetime of a quadriplegic injured at 25. For a paraplegic, the estimated lifetime cost exceeds $1 million.

Some spinal-cord injury patients are now dying from the maladies of aging, such as heart disease, rather than complications from paralysis, Neel said. Those who “take the best care of themselves” will be first in line for breakthroughs in treatment, should any emerge, he said.

Mason, who was in a coma for two months after the crash, said her life now is “pretty good.” Not as good as it was on Easter Sunday, April 11, 2004, when she and her boyfriend, Alan Liu, were cycling along Highway 12.

A motorist with a blood-alcohol level almost four times the legal limit swerved onto the shoulder, hit and killed Liu, and struck Mason about 100 feet farther down the road. The driver, 69-year-old Harvey Hereford, was sent to jail for almost nine years.

Mason, who played lacrosse and ran marathons at Santa Clara University, was sentenced to life in a wheelchair.

Mason sustained spinal-cord and brain injuries in the crash — “the best of both worlds,” she joked darkly. She spent five months in hospitals, followed by lengthy convalescence at her parents’ home in Grass Valley.

Last September, Mason moved into her own home in Sacramento. She delivers passionate warnings to teen audiences about the perils of drunken driving and has a book about her injury, “It Couldn’t Happen to Me,” coming out in September.

Her latest physical achievement was rock climbing in Yosemite in May with Mark Wellman, a noted paraplegic climber and motivational speaker. “It was amazing,” Mason said, going about 100 feet up a sheer granite wall.

Going in an instant from active and healthy to paralyzed is “a frightening experience,” said Neel, who’s treated spinal-cord injuries for 25 years.

Modern medicine can diminish the impact of an injury and help restore lost function, he said. Rehabilitation focuses on enabling paralyzed people to physically and mentally cope with and compensate for their limitations.

“We try to teach each patient to live a fulfilling life, albeit a different life,” Neel said. The message is: Physical abilities do not define who we are, he said. “Who we are is in our minds and in our hearts.”

Lightweight wheelchairs and voice-activated computers, as well as strategies for managing bowel and bladder functions, help paralyzed people get about.

There are perils associated with immobility — bedsores, infections and shortening of unused muscles — that require “constant vigilance” by patients and their caregivers, Neel said.

Mason said that a sore on her left heel just closed after nearly three years. Quads and paraplegics can’t feel such an injury, which could become deadly if untreated.

Christopher Reeve, the actor paralyzed from the neck down in a 1995 horseback riding accident, died nine years later, at age 52, after receiving an antibiotic to treat an infected pressure wound.

Mason, who has made great physical strides, said the emotional challenge of paralysis is greater. “I really fight to try not to let it define me,” she said.

But Mason, who still can’t remember her accident, said she does get depressed, more so lately than before. “I think the sadness gets more pronounced as my mind heals and I get more aware of everything that was taken from me in an instant,” she said. “My legs, brain, Alan, speed. Essentially, my whole life has been turned upside down.”

Mason said she draws some consolation for the “26 wonderful years” she had before the tragedy on Highway 12.

“Hard as this is, you’ve got to keep going.”

Banker injured in Spain moved to Atlanta for treatment