The paralysis buster: Jab and exercise combination could help sufferers regain the use of their hands 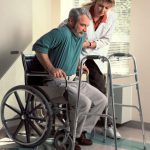 A jab that helps heal damaged spinal cords and eases paralysis is being developed by British scientists.

It is hoped that patients such as car crash victims could be given back the use of their hands, allowing them to eat and drink without help and even to return to work.

While the jab offers improvements that may seem small compared to the possibility of making the wheelchair-bound walk again, it could bring a huge benefits in terms of quality of life.

Scientists are developing an injection that will help heal damaged spinal cords and ease paralysis.

Stroke patients could also benefit from the drug chondroitinase, which could be on the market in seven years.

Experts from the charity that bears the name of Superman actor Christopher Reeve, who was left paralysed from the neck down after a 1995 riding accident, describe the potential implications as ‘ profound’.

Chondroitinase, which is based on a bacterial enzyme, triggers growth of new nerves. Combining it with physiotherapy restores some movement.

To show this, researchers gave regular doses of the drug to rats with a paralysed front paw.

When the rats were also subjected to an intensive exercise regime focusing on the paw, they quickly became more dextrous.

After six weeks they were almost as good as healthy creatures at grasping seeds and sugar pellets and eating them, the journal Nature Neuroscience reports.

‘The thing that works is doing both together. Chondroitinase opens a window during which you can make rehabilitation very effective.

‘It takes your spinal cord to a level of plasticity you had at the age of five or so, making the possibilities for bypassing the injury and remaking circuits that bring back function so much better.

‘We think this is going to be an important treatment.’ Victims of the most common type of spinal cord injury, where the shoulders and elbows work but the hands do not, could regain use of their fingers.

Professor Fawcett said: ‘Getting out of a wheelchair is a low priority for patients because wheelchairs work well. Their highest priority is hand movement.

Around 40,000 Britons are living with paralysis caused by car crashes, sporting accidents and falls, at a cost to the NHS of up to £1billion a year. Chondroitinase is now being made safe for use in humans and the first trials could start in as little as three years.

It is likely patients undergoing rehab would be given four or five fortnightly jabs, with the first around a month after the injury. It is not clear if patients with long- standing problems would benefit.

The need for large- scale tests means the drug will not be on the market before 2016.

Mark Bacon, of charity Spinal Research – which is funding studies into making the drug safe for human use – said it had ‘enormous potential’.

Susan Howley, of the Christopher and Dana Reed Foundation – in the U.S. which part-funded the study – said: ‘These are profound improvements that will benefit society at large.’