Some Go for the Gold; Others Just Want to ‘Feel Normal Again’ 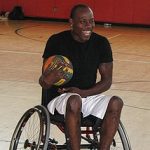 CHICAGO — When Maryland native Keith Buckman regained consciousness in a Bethesda hospital last July, he knew he would never again play football, basketball or soccer, the sports he had loved growing up in Forestville. He barely survived a 2008 suicide bombing in Iraq’s Anbar province that killed 25 people, including three fellow Marines. His legs and one arm were shattered.

He never dreamed that a year later he would be training for the Paralympic Games, hoping for a berth in “mono-skiing” at the 2010 Winter Games in Vancouver or in wheelchair basketball at the 2012 Summer Games in London.

Buckman was among 28 disabled veterans or active-duty soldiers in Chicago last week for a training camp aimed at steering them to high-level Paralympic competition — or at least easing them back into athletics after life-changing injuries. The camp, one of about six around the country this year sponsored by various institutions and the U.S. Olympic Committee (USOC), was a place for coaches to scout new talent — people who may get funding for training and coaching or expenses-paid stints at the U.S. Olympic Training Center in Colorado Springs.

The Paralympics, held since 1988 at the same site as the Olympic Games, typically feature only a few veterans. The USOC wants to increase military participation, especially given the number of disabled young Iraq and Afghanistan veterans and the advances in prosthetic and other medical technology that make sports more accessible and comfortable for those with amputations or other disabling injuries. The Paralympics grew out of a competition in England in 1948 for injured World War II veterans.

After three months in the intensive care unit, Buckman, 26, was moved to Walter Reed Army Medical Center, where he resides in Malone House. It took him months to learn to walk again after the June 26, 2008, bombing. He can’t play sports on his feet, but through several Paralympic camps and military programs he fell in love with wheelchair basketball and mono-skiing.

“You go 10 times faster than with regular skis,” he said while tossing a volleyball with Juan Arreola, an Illinois native whose legs were paralyzed after a roadside bomb blast in 2006 in Fallujah, Iraq. “Doing sports makes me feel normal again.”

The Chicago camp was hosted by the Rehabilitation Institute of Chicago (RIC), known for its pioneering work in building bionic arms.

“Disability sports improve so many things,” said Mitch Carr, RIC’s fitness, sports and recreation director. “It keeps weight under control and reduces secondary conditions that develop because of a sedentary lifestyle. Then there’s the social impact and improvement in self-confidence.”

The Chicago camp featured one phase for veterans with traumatic brain injury (TBI) and visual impairment, and another one for those with spinal cord injuries and amputations. Adapting sports for brain-injury victims can be a challenge, since effects of the injury are not always apparent.

An international Paralympic classification system lists athletes in six categories (amputation, cerebral palsy, visual impairment, spinal cord injuries, intellectual disability and other), which are further broken into classes depending on the extent of injury. TBI victims are likely to fall into the same category as those with cerebral palsy, Callahan said.

The USOC launched its Paralympic Military program in spring 2008, after holding several military camps starting in 2004. It is developing an “emerging athletes” component in which promising disabled veterans or soldiers will be identified at camps like the one in Chicago, then offered coaching and other resources.

Iraq war veteran Melissa Stockwell, who lost her leg to a roadside bomb in 2004, is a swimming coach. She says people assume it is easy to qualify for the Paralympics, but she notes that she put her life on hold for eight months to train in Colorado Springs for the Beijing Paralympics last year.

Centra “CeCe” Mazyck was paralyzed from the waist down while training in November 2003 at the U.S. Advanced Airborne School at Fort Bragg, N.C. During a high-altitude jump, she became entangled with someone else and fractured her spine when she landed improperly. She started competing in the javelin and shot put. Now she is learning to swim, in part so she can look out for her 7-year-old son at the local pool.

“At first I didn’t even want to get out of my car to pump gas,” said Mazyck, 33, who is pursuing a sociology degree at the University of South Carolina in hopes of working as a Department of Veterans Affairs counselor. “I built self-confidence from being around individuals in wheelchairs playing sports, and then took that to the outside world.”

She said she wishes more disabled female veterans played sports. She was among only several at the camp. Last year at the Augusta VA in Georgia, she met Darrell Fisher, a veteran who was shot and paralyzed in Atlanta after he had left the service. She persuaded him to take up athletics and attend the Chicago camp. They are now engaged.

Lopez de Victoria, 64, also dreams of competing in the Paralympic Games — in archery. The USOC sponsored a private archery coach for him leading up to the recently concluded biannual State Games of America competition in Colorado Springs.

In 2001, he went into surgery for a spinal-disk injury lingering from his service in Vietnam, he said. The surgery severed his spinal cord, costing him the use of his legs and his job as a maintenance director at a Navy facility in Puerto Rico. He fell into a deep depression and would sit under a mango tree for 10 hours at a time, talking to no one. Then nephew Orlando Lopez, 35, an Army veteran whose legs were paralyzed by a spinal tumor, took Lopez de Victoria to a wheelchair basketball game. He fell in love with the sport, then moved on to hand cycling, archery and rowing.

“Instead of sulking and saying, ‘Why me?’ I want to push my body as far as I can take it,” he said before joining younger vets on the basketball court. “I love watching these young guys go at it. We feed off each other’s energy. It makes me go the extra mile.”

Facebook
Twitter
Email
Mix
Digg
Previous articleBounce Back – Reclaiming life after a spinal cord injury
Next articleThe paralysis buster: Jab and exercise combination could help sufferers regain the use of their hands