Once a helping hand, now in need of aid 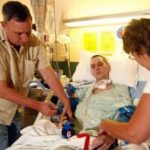 PANAMA CITY — Pictures of Michael Harris and children in wheelchairs, children with cancer and veterans home from Iraq line the walls of his hospital room at Bay Medical Center. They’re memories from the many years when Michael volunteered with Buckmasters and the Way Outfitters, teaching terminally ill and disabled children and adult veterans how to hunt and fish in the Florida Panhandle.

One 8-year-old boy with leukemia whom Michael took out hunting was able to shoot three deer. Another 8-year-old with spina bifida went hunting and fishing with Michael and was able to shoot his first deer. Michael also initiated and coordinated with local EMS employees a campaign to voluntarily mow lawns for the wives of National Guard members serving in Iraq.

In a twist of fate, however, Michael now finds himself in the same position as many of those he reached out to help: in need of a helping hand to continue his recovery.

In March, Michael was helping a friend unload sheets of plywood for a home construction project in Panama City. Stacked at a bad angle, one by one the plywood fell like dominoes onto Harris and crushed his C-5 and C-7 vertebrae and injured his spinal cord. His parents rushed him to the emergency room at Bay Medical Center, where he has been ever since.

Both parents have been by his side, day and night, since the accident.

“This is our home away from home,” said Darlene, Michael’s mother.

Although Michael worked full-time, his employer did not offer health care. As an active, healthy young man, Michael didn’t think about needing an insurance plan. His unexpected injuries have forced him to use Medicaid. As a patient over 21, Florida Medicaid allows him 45 days of hospitalized care per fiscal year. This fiscal year began July 1; Thursday will be Harris’ 45th day in Bay Medical.

“We don’t know where we’ll go after that,” said Johnny, Michael’s father.

The ventilator creates a problem both for transferring Michael to a rehabilitation facility and for caring for him at their home, Johnny said. He said his family is planning a barbecue at their house to raise money to remodel their home to accommodate Michael’s disability, but that is a last resort.

A spinal cord injury usually takes two years to heal before recovery can really progress, Darlene said. And despite their best hopes for their son’s recovery, the Harrises said getting Michael into a Spinal Injury Rehabilitation Hospital will be crucial.

There are 14 spinal cord rehabilitation centers in the country. One is the Boston Medical Center, where Christopher Reeves was treated and rehabilitated. Spinal cord injuries are fragile and complicated, said his parents, and they often comprise two steps toward recovery, followed by one step back.

“We want to get him to his maximum capacity,” Darlene said.

The family spent weeks waiting to hear back from Shepherd Hospital in Atlanta, a facility equipped to rehabilitate spinal cord injuries, only for Medicaid to say it could not accept Michael because of a lack of funding. The Harris family said it could cost around $600,000 for Michael to be cared for at a facility like Shepherd. His family also said other states’ facilities won’t work with the Florida Medicaid system.

“We’re not trying to take advantage of the system,” Darlene said, adding that if Michael would have had health care, he would be at Shepherd already. “Right now, we’re just waiting for a breakthrough.”

Michael’s recovery has been sprinkled with setbacks but marked by some progress. Onceunable to move, Michael now can lift his arms, shrug his shoulders and turn his wrists over. A ventilator keeps him talking, but with a nod of his head, Michael indicated it does not hurt to move his upper-body but feels like he is working hard against gravity.

Meanwhile, Michael lies in his hospital bed, his eyes lighting up at the mention of visits from his 5-year-old son Braden. When asked what he wants more than anything, he mouths “to walk.”

A card taped to the wall of his hospital room sums up what his parents think about Michael’s recovery. A picture of a tree on the front, the card reads, “You’re getting stronger every day.”