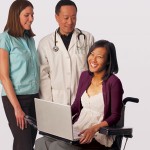 Michele Lee, 26, is a woman with a good job, an apartment in the city, a talent for painting and an independent, adventurous spirit. She doesn’t let being in a wheelchair keep her from enjoying being young and enjoying all the fruits the city of Chicago has to offer.

In 2003, two days before her graduation from the University of Arizona, Lee was in a car accident on her way to pick up her parents at the airport. Her C5 vertebra was fractured, resulting in, as she puts it matter-of-factly, “the whole paralysis thing.” She was left with no sensory or motor function in her legs and very little function in her arms and hands.

It would be several years before Lee made it to the Rehabilitation Institute of Chicago, however. Frustrated by the attitude of the hospital in Tucson, which she says was something along the lines of  “she’s never going to walk again, now go home,” Lee’s parents decided to send her to their native China for traditional Eastern medical treatment. She spent a total of three years there, receiving acupuncture, massage therapy, reflexology and other types of traditional Chinese medicine. Although she says she met a lot of interesting people and learned to speak Chinese, the treatments did not provide ideal results, and Lee returned to her Chicagoland home in much the same situation she was in when she left for China.

Taking a “Second Look” at Rehabilitation

She came to RIC for its Second Look program, a comprehensive medical and rehabilitative inpatient “recheck” specifically for people who have been living with a spinal cord injury for a while and who have new goals they want to work on.  She was evaluated by David Chen, M.D., medical director of RIC’s spinal cord injury rehabilitation program , along with a team of nurses, occupational and physical therapists specializing in spinal cord injuries. From the evaluation, it was clear Lee had a lot of work ahead of her. “I didn’t know how to do anything,” she says.

She was admitted to the hospital for intensive inpatient rehabilitative therapy.  And she was ready to work.  “She didn’t let any self-pity get in her way, but was determined to find ways to work around her limitations,” says Sally Taylor, allied health manager of the spinal cord injury unit and Michelle’s physical therapist.

The goal for anyone recovering from a spinal cord injury is to maximize independence and quality of life by learning skills for adapting to the new situation. “We work to create as much independence as possible with what the patient has working today and teach strategies for doing everyday activities in a new way,” says Taylor.

At the beginning of her three-month stay at RIC, Lee was so weak and de-conditioned that she couldn’t sit up without passing out. “We essentially had to start from scratch,” says Taylor. Her rehabilitation, consisting of a minimum of three hours of coordinated therapies five days a week, started with the basics: learning how to roll over in bed, getting in and out of bed and transferring into and out of a wheelchair.

One of the most exciting advances for Lee was learning to use a power wheelchair. Although she had a basic transport wheelchair, she had never pushed herself or controlled the chair in any way. She was fitted for a state-of-the-art power wheelchair through RIC’s Wheelchair Seating and Positioning Center. RIC’s therapists trained her in it and made sure she was comfortable with the chair. For anyone in a wheelchair, proper positioning is critical to comfort, health, independent functioning and productivity. For someone as determined as Lee, it was life-changing. “A whole new world opened up to her when she realized how much she was going to be able to learn to do,” says Taylor.

Lee was amazed at the possibilities this new-found mobility and independence could bring. “It was amazing to consider the things I could do with this type of independence. I was truly hopeful for my future,” she said.

As Lee’s three-month stay progressed, her physical and occupational therapists helped her to gain strength and use the muscles she could control as well as the little mobility she retained to maximize function. She learned to dress herself and feed herself. Her family also received hands-on training to help her navigate at home, get in and out of a car and perform other essential everyday tasks.

RIC has been providing comprehensive spinal cord injury care for more than 25 years. It has been designated as the Midwest’s first Center for Spinal Cord Injury Treatment and named a Model System Spinal Cord Injury Center by the National Institute on Disability and Rehabilitation Research. Through its robust rehabilitation research center, the largest in the world, RIC continues to pioneer research and medical and technological advancements for people with spinal cord injuries that will continue to advance ability.

While she was relearning basic skills through physical and occupational therapy, in recreational therapy , Lee uncovered an entirely new talent: painting. Because Lee’s injuries left her with limited use of her hands, painting in art therapy was recommended as a way to

work on her grasp and fine motor skills. Many patients find art therapy a relaxing way to practice new skills in a quiet environment away from the hustle and bustle of the hospital floor. Few find in it a new passion.

Working with acrylic paint on canvas, Lee began by imitating different styles of painting inspired by the works of Georgia O’Keefe, Piet Mondrian and Mark Rothko. As her fine motor control and wrist flexion or movement improved, she began to experiment with her own style and found she had an affinity for painting that was a complete surprise to her. Art therapy is generally scheduled for one-hour sessions several times a week; Lee petitioned for two-hour sessions every day.

“After my injury I never thought I’d be able to do anything, much less something artistic,” she says. “When I began art therapy, I wasn’t able to hold a brush or make a straight line. As each week progressed, I found that my hands got stronger and my grasp improved. My ability to manipulate the brush increased and I was able to incorporate different painting techniques.”

She now has a style all her own – abstract blocks of color that she describes as Rothko-esque – a large body of work and a “huge following,” says her art therapist, Phoebe Whisnant. Each year, RIC’s Associate Board hosts a juried art exhibit called ArtFutura to help raise funds for the art therapy program. Three years ago, Lee’s paintings were featured in the patient-work portion of the exhibit. According to Whisnant, people “followed Michele around and begged her to sell her paintings.” She has been a featured artist each year since then and has sold out at each show.

Despite her success as an emerging artist, Lee still hoped to have a career and a “real job.” RIC’s vocational rehabilitation specialists helped her to realize that work was still a very real possibility for her. They helped set up an interview for her at Aon Corporation, the Chicago-based insurance giant, where she now works as a treasury analyst. RIC supplied her with voice recognition software and a typing stick to use at work, but she prefers to type with her knuckles.

Lee lives with her mother, who helps her with laundry, cooking and getting dressed, but in most ways she is completely independent. She lives five minutes from her office and “drives” herself to work in her wheelchair.  She attends outpatient therapy two days a week to maintain her strength and function and is active in RIC’s peer visitor program. Through that program, Lee meets with current spinal cord injury patients to offer encouragement, support and first-hand information on the realities of living with a disability.

What’s next for her? She’d like to go back to school for an advanced degree in law, business or – who knows? – maybe art. Whatever she does, she is prepared to embrace and enjoy it. “My attitude has always been, ‘OK, what’s next?’ and RIC is a great place to help me figure that out,” she says.

In the meantime, this twenty-something is enjoying the culture that living in Chicago has to offer with wine-tasting, dinner with friends, books, art, music and plays.

Do you have a story of ability? RIC would love for you to share your stories and pictures with us on Facebook