Flying Against the Odds 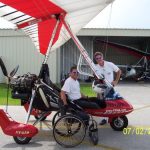 In 2004, a skydiving accident left Jim Carlaccini with a T-12 complete spinal cord injury. Always having an interest for aviation since a young age, he didn’t let the accident stop him from getting back into the air.

“Aviation is my passion,” says Carlaccini, age 55. “I refer to it more as a passion than a hobby.” Having received his pilot’s license in 1989, Carlaccini began skydiving in 1995.

After his accident, he purchased a weight-shift control aircraft, also referred to as a “trike.” “It maneuvers by shifting your weight,” explains Carlaccini. “You don’t need to use your feet to operate it.” The trike has hand controls for the throttle, brakes, and steering. “Once I’m in the air, there’s no difference between me and anyone else.”

Carlaccini uses his trike as often as he can. “I like to take it out as long as the winds aren’t bad,” said Carlaccini. “I can take it out everyday if I want.”

Putting a deposit down on a larger plane, Carlaccini has hopes that when the plane is completely built, he will be able to fly around the country and visit family.

Learn more
Learn more about active lifestyles from a wheelchair from our Paralysis Resource Center.

Tell us your story
Telling your story is one way to let anyone touched by paralysis know that they are not alone. We’ve created a place where you can share your journey for your benefit, and the benefit of others. Your story matters. Share it.