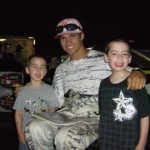 He lives by the one word: Perseverance. His goals and dreams are being fulfilled with each challenge that comes his way.

He has raced in the Baja 500, along with competing in the Ironman competition while covering the 63 mile event in just seven hours, 14 minutes.

He has also competed in, and finished the L.A. Marathon fifth in a hand cycle, and even competed in the X-games in Los Angeles back in 2008.

Ricky “Bobby” James, the 20-year-old phenom from Murrieta California, is like no other race car driver at the speedway.

James, who won the 2008 West Coast Pro Truck championship at Toyota Speedway of Irwindale, proved to himself and others that being a paraplegic was not going to stop him from becoming a champion.

At the age of 16, Ricky James broke the T7 bone on his spinal column in a motocross accident that left him a paraplegic.

But that didn’t stop him from continuing to pursue his dreams of driving a race truck. Instead it fueled a fire in him to continue what he had always dreamed about as a youngster.

Ricky uses hand controls to race his truck around the half mile track at Toyota Speedway.

Watching him maneuver his truck around the track you would never know that he had any kind of a handicap.

James races just as hard as the next driver out on the track. His skills are almost unmatched comparing them to his fellow drivers, and he is also very much respected as well as a fierce competitor.

James is also very fan friendly talking to the kids and also signing autographs after racing is over in the pit area, and he is also an inspiration to those that have ever met him.

He rides a specially prepared dirt bike, while at the same time inspiring other paraplegics that if you set your goals, and put your heart into it there is nothing that is impossible.

James also visits the local rehabilitation centers that treat spinal cord injury patients, to inspire them that life is not over because of there injury, but instead to continue to pursue there dreams and there life long goals.

One by one he is going down his list and working hard to accomplish the goals that he has set for himself.

James is also currently working on a documentary video about his life story, which will be used to reach out beyond his immediate area that there is hope and a life after a spinal cord injury.

The impact of a documentary video of this magnitude should have life changing affect to those who feel there is no hope.

Ricky is an amazing young man that is overcoming all the odds at such a young age, and at the same time having fun while doing it.

His mindset and drive to achieve life’s personal goals will definitely reach not only those who are handicapped, but also those who have no handicaps that feel personal goals are sometimes out of reach.

Inspiration like this is hard to find especially in someone so young.

He still has his whole life ahead of him, but yet he chooses to help those around him.

The world is at his hands, and he is taking full advantage at what he has been through.

Instead of giving up, he continues to persevere even though all odds were against him.

James has risen above the rest while choosing a road that has taken him to a whole different realm. A realm that was probably never thought of before that fateful day in March of 2005.

Our short tracks across the country continue to give us race fans a different angle at what racing is all about.

There are some really good, as well as inspiring stories that come from these backyard race tracks, and you never know who, or what you may encounter while watching these up and coming racing stars.

Ricky’s next goal is to someday race in the late model series, and by what he has already accomplished, it shouldn’t be to long before he adds that to his list of accomplishments.

Good luck to Ricky “Bobby” James, and all the short rack drivers around the country in the future.

Perseverance is a big word and also has a lot of meaning.

Especially to those who look beyond what they are going through, and look to the final outcome.

It can only happen when each individual takes the initiative to overcome all obstacles, and go out and give it there best shot.