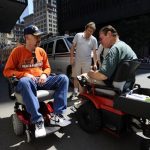 Getting Camy Stark to Bible class used to be difficult for her parents, Josh and Lori. The 5-year-old from Moore, Okla., has caudal regression syndrome, a disease with symptoms similar to spina bifida, and it made traversing the church parking lot a challenge.

“We walked along with her until she got completely tired, until she wanted you to carry her,” Josh Stark says.

Now Camy zips up and down her driveway to grab the mail and has no problem getting around parking lots, thanks to her new power wheelchair. It came courtesy of David Heim, better known as the Wheelchair Recycler.

Heim has helped more than 500 people since he started his company in 1998. Heim, who has been in a wheelchair since a car accident in 1995, refurbishes donated wheelchairs in his shop in Marlborough, Mass. He sells the chairs to clients for about $800 to $1,000 — a fraction of their usual cost — which covers parts and labor. In many cases, he gives the chairs away.

Heim, 47, uses his mechanical skills — he has been working in machine shops since he was 21 — to customize each chair to fit a client’s needs. Whether it’s a chair small enough for Camy, or wheels that can trudge through sand and snow, he makes sure each chair is personalized.

“I’ve seen too many people without mobility, and there is so much out there,” Heim says.

Joseph Canose, vice president for quality of life at the Christopher and Dana Reeve Foundation, says many people would be stuck with broken chairs if not for Heim. Most insurance companies will reimburse to patients only a fraction of the $5,000 to $25,000 it costs for a power wheelchair, Canose says.

‘A person like David is just a real hero’

“The need for people to find alternative means to get into proper chairs has grown significantly,” Canose says. “And a person like David is just a real hero … in that he’s got a skill that he can apply, even though he’s in a chair himself.”

Regina Seals was one of those people in need when she found out about Heim while she was flipping through a magazine at Wal-Mart. Her husband, Choey, used a chair that was too small for him, and he could tolerate sitting in it for only a few hours at a time.

“My husband desperately needed a new chair, and Medicaid turned him down for it,” she says.

Within six weeks of contacting Heim, the new chair arrived at her home in Alexandria, La. Seals says the chair has drastically increased her husband’s mobility.

“It was like a miracle for us,” she says. “My husband goes outside now, waters the garden. That’s something he could have never done before. He literally could not leave the house.”

Though Heim has been refurbishing wheelchairs for families like the Starks and Seals for 11 years, only recently has he received recognition and funding for his work. Up until about a month ago, he was working out of two storage facilities. Now he has moved into his own 1,000-square-foot space. He also has gotten two quality-of-life grants worth a total of $35,000 from the Reeve Foundation for vans to pick up donated chairs.

“It’s really nice to see how the company is taking off, and along with that, he’s getting exposure that has shown people nationwide what he’s doing,” says Mike Ferriter, president of the Boston chapter of the Spinal Cord Injury Association.

Ferriter says that when he first met Heim in 1995, less than a month after the car accident that left him in a wheelchair, all he could do was blink his eyes to say “yes” or “no.”

“He’s been building chairs for people around the U.S. and other countries and shipping them overseas,” Ferriter says. “So he’s well-known now, and he’s really come a long, long way from when he started off.”

Heim, who employs his son Joe and one other person, says he’s determined to keep his service growing. “I see that there is so much need for doing this, but it needs to be funded, because the people that you’re serving just don’t have the money, period.”

Ray of hope for patients with spinal cord injury