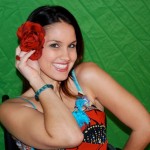 Santina Muha not only rolls like a celebrity, she is a celebrity! She also plays an active role in the disability community.  Santina is a guest writer on the EasyStand Blog, read some of her posts.  I was inspired by her words, “There are people out there doing amazing things, and I believe we should all be recognized for our efforts, no matter what our abilities.”

“There are people out there doing amazing things, and I believe we should all be recognized for our efforts, no matter what our abilities.”

In March 1989, when Santina was just 5 years old she was in a car accident that left her with a spinal cord injury. Now in her twenties she is an active presence in the disability community.  She is a Communications Associate for the National Spinal Cord Injury Association(NSCIA), CNN iReporter, co-host of various online programs like SCI News & Views and Breaking Barriers, mentor to younger wheelchair users and public speaker.

In November of 2007 Santina was the first contestant to use a wheelchair on the gameshow “Who Wants to Be a Millionaire?”  She also recently appeared in a national campaign for Target stores representing consumers who use wheelchairs.

As an aspiring actress & model, Santina rolls with celebrities like Professir X.  Check out her many videos on Professir X’s YouTube page.  You can also check her out on Facebook & MySpace.