Firefighter is an inspiration 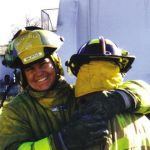 Milpitas Firefighter Sean Simonson didn’t face flames or rescues in 2006, but as he fought a spinal cord injury that left him immobile after a bicycle accident, he inspired many of Milpitas’ first responders.

For his determination and positive attitude, Simonson has been named Firefighter of the Year for 2007.

Simonson’s cycling accident last April came seven years after he began as a firefighter in Milpitas. He was riding on a trail in Santa Cruz when he rode over a pothole that looked as if it had been filled. The sediment was still wet and his tire sank into the hole, sending him over the handlebars. He landed on his chin, with his head back, which injured his spinal cord. The extent of the injury is still unknown, and Simonson is giving paralysis a run for its money.

Simonson proudly waved his arms around in July; before they were tucked up at his sides. He rode a mile in his wheelchair that month.

A few months ago he started driving a van with hand controls, which not only showed he had developed more Motor skills, but he also increased his independence.

Now he visits a clinic in San Diego called Project Walk, which uses intense Physical Therapy, as often as he can. The fire and police departments help him raise money. He then goes down weeks at a time for the therapy, which is not covered by insurance.

Nearly a year since the accident, support from the fire and police departments is still unwavering.

“Anything I’ve even asked for hasn’t even been a question. They’ve been right there, literally at my beckon call,” he said. “They’ve made it very easy for me to focus on nothing but rehab, which is a huge driving force for me to get better.”

Fire Chief Clare Frank said the continued support is a result of his appreciation and determination.

Battalion Chief Rob Mihovich said Simonson’s attitude and personality make it easy for the departments to continue to help in any way they can.

“He’s a great guy and he has a positive outlook himself and on his prognosis,” Mihovich said. “Everyone knows someone they think a lot of, and with that type of person, you continue to give your support.”

The Firefighter of the Year in Milpitas is chosen by a committee of firefighters who have received the award in the past. Nominations can be made anonymously by anyone in the department.

Mihovich believes Simonson is absolutely deserving of the award.

“He’s very good at what he does, has a very positive attitude, he’s a good role model, has shown a can do attitude, is easy to get along with and fun to work with and is very professional,” Mihovich said.

Frank said Simonson’s attitude since his injury has inspired others within the department.

“They’ve seen him display a tremendous amount of courage in the last year in fighting a life-changing event and not letting it change who he is,” she said. “He’s taking the physical courage needed to go into a burning building and turning it into more of a mental spirit. I know he’s awed a lot of people with a lot of the progress he’s made given the extent of his injury.”

It’s easy for Frank and Mihovich to see why Simonson was selected, but, while very honored, Simonson himself was baffled.

“It’s weird because I don’t really get it, but everybody from work and a lot of people I don’t even know send me e-mails, I get about 30 or 40 a week, telling me I’m an inspiration to them,” he said. “All I’m trying to do is walk.”

He said his coworkers have told him he has motivated them to appreciate life more and to not take things for granted.

“I’m honored. I didn’t think I’d be capable of achieving this in my career here in Milpitas,” Simonson said. “I’m very thankful for the opportunity to be the Firefighter of the Year.”