Service Dogs to the Rescue! 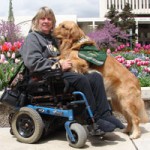 Service dogs do more than just help the visually impaired navigate a crosswalk. Someone living with paralysis could use a service dog, typically Labrador and Golden Retrievers, to pick up any dropped item, fetch packages in grocery stores, turn lights on and off, make emergency telephone calls, help with balance, and even make transactions with money at a bank or store.

Stephen Kenny received his 2-year-old black Labrador Retriever, Rosie, in May 2009. Owning his first service dog, Sunshine, for 13 years, Stephen is well aware of how much having the dogs around impacts his life. “I don’t even know if I’d be able to live without them,” says Kenny. “Plus, it puts my loved ones at ease knowing I have the dogs around.”

“I was about to water the garden one time when I picked up the hose and fire ants were all over it,” explains Kenny. “I threw the hose, but in the process, threw myself out of the wheelchair.” Kenny simply commanded Sunshine to get the phone, and he called for help.]

Kenny, who is living with a spinal cord injury due to a diving accident in 1993, believes that even if he wasn’t in a wheelchair he would still own a dog. His service dogs are both his pets and his helpers. Being a pet or companion however, is second to providing help and assistance. “As soon as the leash and cape (or vests) go on,” says Kenny, “the dogs know to sharpen up, and it means they’re ready to leave the house, and get in their place right next to me.” The dogs are fully aware of when it is time for work and when it is time for play. “I give them the command, ‘release’ and it tells them, ‘Okay, we’re off duty now, we can play,’” explains Kenny. When Rosie and Sunshine are in “relaxed mode” at home, the dogs will wrestle with a tug toy with Kenny in the backyard.

When in work mode, it is important for an able-bodied person to never approach a service dog. “It’s not good etiquette,” says Kenny. “The dogs are trained not to go to other people or dogs, otherwise it creates a bad habit.”

Because the dogs are so eager to please, they will do anything for praise or a treat. “The dog can literally pee on command when I say ‘get busy,’” laughs Kenny. “And they want to hear you thank them or pat them on the head for doing a good job. Every command is followed up with a marker like, ‘Yes, that’s it, good girl.’”

Having the service dog at hand provides security. “Most disabled people have a pretty individual streak,” says Kenny. “It’s much easier to ask the dog for help rather than having to ask a random person. It’s one less thing I have to worry about.”

Having limited function in his hands, the dogs pick up, on average, five things per day from the TV remote to silverware. They’ll even close the refrigerator door. “It gets to the point, I don’t even have to ask them to do something,” says Kenny, “they already know.”

“Sunny can bring me a beer from the refrigerator,” jokes Kenny, “I’m trying to teach it to Rosie.”

More than just a dog

Janet Severt, founder of New Horizons Service Dogs (NHSD) in Florida, opened the non-profit organization in 1994. NHSD has since placed over 160 dogs with those in need, approximately 20 in the past year. NHSD is also a past Reeve Foundation Quality of Life grant recipient.

Severt is not only the founder of the organization, but is also a service dog user herself. “My dog (Cypress) can pick up dimes or credit cards off my tile floor,” explains Severt.

Since age 7, Janet has been a C-5, C-6, C-7 quadriplegic suffering from arteriovenous malformations. In 1968, she began puppy raising seeing-eye dogs, and has been involved with using dogs to help others ever since.

The service dogs, as well as clients receiving them, must go through rigorous training. For about a year-and-a-half, the dogs are placed either in foster homes or a prison program where inmates raise them. (There are many prison programs around the world that involve service dog training. It helps the inmates learn responsibility, while the dogs receive devoted attention and training.) The dogs then return to New Horizons where the staff perfect and work on the 80 commands the dogs were taught. At this point, matches of the dogs and clients are made. Personalities of both the dogs and clients are considered. The client must then go through a two week training program of in-classroom learning, including a written exam at New Horizons, and be tested with commands in public surroundings with the dog.

“The dogs know everything at this point,” says Severt, “but not the people.” It takes time and patience on behalf of the clients to earn the dogs’ respect and learn the necessary commands. “I really enjoy working with clients, they learn from me,” explains Severt. “Because I have a disability, I can tell people, ‘What do you mean you can’t do that!’”

Currently, there are 40-45 people, equivalent to 1-2 years, on the NHSD’s waiting list to be matched up with a service dog. In general, the cost for purchasing, training, and placing a service dog can range from $20,000-$38,000. The cost to the recipient of a service dog is between zero to $2,000 dependant on the amount of underwriting, (such as grants from the Reeve Foundation), the organization is receiving.

The dogs not only provide assistance for the disabled, but also provide comfort and companionship. “It is really rewarding to see the difference these dogs make in people’s lives,” says Severt. “They bring them self-confidence.”

Rosie Welch has received not one, but two, service dogs from NHSD. Living with a spinal cord injury and Multiple Sclerosis, Welch feels safe with Cruiser, her 4 ½ year old Labrador Retriever. “He would know where to go if I ever needed help,” says Welch. “He knows where all my neighbors live. Because he’s with me constantly, he becomes so alert to me and my needs. It’s like having my soul mate around.”

Cruiser is much more than a safety net for Welch. “I tell him ‘give’ at the grocery store,” explains Welch, “and he knows to give my wallet to the cashier. Or if I need a drink, he knows exactly what shelf I keep the Pepsis on in the refrigerator.” Retrieving items is just one of the tasks Cruiser performs.

“I love to play Bingo,” explains Welch. “Cruiser carries my bingo bag for me, then goes and gets treats from all the other ladies, then comes and lays down right under me. We have a lot of good laughs!”

Along with being her best friend, Cruiser loves meeting new people. “It used to be I would be in a grocery store and it was like I had a disease because I was in a wheelchair. People would walk down the other aisle,” says Welch. “Now people don’t even see the wheelchair. They want to talk to me and find out about Cruiser. Now I have to plan on spending extra time in the store!”

Learn more
Download a PDF with more information about service animals from the Paralysis Resource Center.

A Comparison Between People with Spinal Cord Injuries