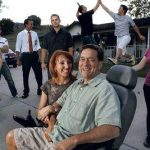 The construction site in East San Jose is a clutter of tools, building materials and heavy machinery. Everyone must wear a hard hat and it’s not easy to get around.

That’s especially the case for someone in a wheelchair.

But here is Mark “Sparky” Muhn, 20 months removed from a ski accident that left him paralyzed, still doing the contracting job he loves. Even if it means having his wheelchair strapped to a forklift sometimes and carried to a concrete slab foundation where he can supervise his work crew.

Muhn isn’t the sort who allows challenges to stop him.

“Probably isn’t legal being up in the air like that,” Muhn said good-naturedly of his wheelchair levitation. “I just guess I’m the kind of guy who was trying to break his neck for a long time.”

It happened on March 9, 2008. Muhn slammed headfirst into a boulder on his last planned run of the day at Heavenly ski resort in Lake Tahoe. It was a particularly hard blow for a man with an adventurous streak who had taken a hands-on approach to running his own construction business for nearly 40 years.

Being confined to a wheelchair, though, hasn’t stopped him from living his life.

“I’m constantly amazed by him,” said his friend, Tim Miller. “I’ve seen him on two occasions depressed, and only for brief periods of time. Other than that, he’s always thinking what he has to do next. He’s just never stopped and never given in.”

Muhn, who presides over a Brady Bunch-style brood of 10 children, won’t take credit for his resiliency.

“My friends have been incredibly supportive,” said Muhn, 52, of Morgan Hill. “And my family is there if I need anything. They’re always just sort of watching me sideways to make sure that I’m OK.”

In this family, that’s a lot of eyes.

Muhn always was the outdoors type, and that’s not just because he has been “bending nails” in construction since he was 14. He’s also hang-glided, white-water rafted and snowmobiled. He even has a pilot’s license.

His kids often would accompany him on his adventures. He already had six children of his own when he met his current wife, Carol. She had four kids and their marriage, 2﻿1/2 years ago, put those TV Bradys to shame in sheer numbers.

“They get along better than anybody could have expected,” Muhn said of the kids who range in age from 14 to 27. “They’ve been so supportive of Mom and Dad. They’re a pretty impressive group.”

Added Carol Muhn: “It’s a lot of fun around the dinner table when everybody is home.”

They were on a family trip to Tahoe with four of the kids when Muhn’s skis got hooked on a branch hidden by snow and he was pitched into the boulder.

The result was a spinal cord injury that left him a quadriplegic. While doctors warned he might not make any improvement, Muhn assumed it would be a temporary condition.

“I thought I’d be running by now,” he said. “I had no idea how devastating the injury would be. I just paid attention to all the success stories and ignored the other ones. But the longer I was sitting, the more believable those other ones became.”

Hours of grueling therapy have yielded results. Muhn has limited sensation in his left leg. (“It feels like I’m wearing 10 pairs of pants.”) He now can even walk short distances with leg braces and a walker. His personal best is one-eighth of a mile in 48 minutes.

“I can’t use my tools anymore, but being on the job site was important to me,” said Muhn, who started his company 23 years ago.

Friends organized a fundraiser to help Muhn modify a van and get a high-tech chair. But every day remains a challenge — like overcoming wheelchair malfunctions that can make it difficult to use.

“You have to deal with so many different things when you have a disability like this,” said Carol Muhn, a San Jose middle school teacher. “But he has such an upbeat attitude about everything. It’s really something to watch.”

Back on the site, Muhn paused a moment to give instructions to workers high above in the rafters. He can’t be up there himself anymore, but he’s still a builder.

“Who wants to hang around with somebody who is depressed all the time?” he said with a smile. “Not me. But it’s important for me being out here because this is who I am.”

Misfortune won’t get the better of quadriplegic filmmaker Paddy Slattery

The Simple Things: Giving Thanks For Life