On Your Last Nerve: Researchers Advance Understanding of Stem Cells 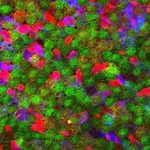 Researchers from North Carolina State University have identified a gene that tells embryonic stem cells in the brain when to stop producing nerve cells called neurons. The research is a significant advance in understanding the development of the nervous system, which is essential to addressing conditions such as Parkinson’s disease, Alzheimer’s disease and other neurological disorders.

The bulk of neuron production in the central nervous system takes place before birth, and comes to a halt by birth. But scientists have identified specific regions in the core of the brain that retain stem cells into adulthood and continue to produce new neurons.

NC State researchers, investigating the subventricular zone, one of the regions that retains stem cells, have identified a gene that acts as a switch — transforming some embryonic stem cells into adult cells that can no longer produce new neurons. The research was done using mice. These cells form a layer of cells that support adult stem cells. The gene, called FoxJ1, increases its activity near the time of birth, when neural development slows down. However, the FoxJ1 gene is not activated in most of the stem cells in the subventricular zone — where new neurons continue to be produced into adulthood.

“Research into why and how some stem cells in the subventricular zone continue to produce new neurons is important because a biological understanding of how these cells function can contribute to new treatments to replace damaged or diseased brain tissue, hopefully in regions that cannot do this by themselves,” says Dr. Troy Ghashghaei, an assistant professor of neurobiology at NC State and the senior author of the research. “This research helps us understand brain development itself, which is key to identifying novel approaches for treatment of many neurological disorders.”

When the FoxJ1 gene is activated, it produces a protein that functions as a transcription factor. Transcription factors swim through the nucleus of a cell turning other genes on and off, turning the embryonic stem cell into an adult cell. Some of the adult cells will function as stem cells, creating new neurons, but most will not — instead serving to support the adult stem cells by forming a stem cell “niche.” This niche has a complex cellular architecture that allows adult stem cells to remain active in the subventricular zone.

Ghashghaei’s lab is now moving forward with new research to determine what activates the FoxJ1 gene and how the FoxJ1 protein regulates the expression of other genes. This understanding will reveal how the activation and inactivation of genes controlled by FoxJ1 orchestrates the development of the adult stem cell niche. Ghashghaei’s laboratory is a recent recipient of funding from the National Institutes of Health to support this line of research.

The research was co-authored by members of the Ghashghaei laboratory at NC State including graduate students Benoit Jacquet and Huixuan Liang, research associates Raul Salinas-Mondragon, Blair Therit and Michael Dykstra, as well as a biochemistry undergraduate student Justin Buie. The work was in part a collaboration with investigators from the Cincinnati Children’s Hospital Medical Center, UNC at Chapel Hill, and Washington University in St. Louis. The paper is a featured article in the current issue of the journal Development.

The long road of recovery after spinal cord damage