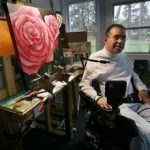 Michael Monaco would like to move his arms. In his dreams, he would like to walk his dogs, drive a car, greet a visitor to his Lincoln Park home at the front door, standing.

In his dreams, he would like to walk his dogs, drive a car, greet a visitor to his Lincoln Park home at the front door, standing.

But reality for Monaco is his wheelchair. It moves when he blows into a strawlike tube. His hands are strapped to the arms of the chair. He cannot lift them.

There is nothing that prepares someone to be a quadriplegic, Monaco said.

“It’s not like cancer, and they can brace you for it,” he said. “This is something that changes your life in a split second. The minute you’re injured, you lose everything — mentally, physically, spiritually, sexually. You are cut off.”

For Monaco, that moment occurred 30 years ago on Nov. 30, 1979, when he was in a car crash that also left one of his friends dead.

It is not too much of a cliche to say an accident like that forces a person to rethink his life.

Physically, the accident was very hard on him, but, Monaco says, at the time it was immeasurably hard on his family.

“They have to face life with someone who comes home,” said Monaco of his parents, who knew their son would have to be cared for — perhaps — for the rest of his life.

Thirty years ago, medical care for people with spinal-cord injuries was less well-defined than it is today, he said.

Today Monaco owns his own home and has three businesses that provide him with a steady income.

One, his Web design and development company, pays his electric bill, he said. He shares ownership of the second — a home health care company — with his father. The third company supplies art to Mouth and Foot Painting Artists Inc., a worldwide outfit that buys artwork created by handicapped artists for use in greeting and holiday cards, calendars, wrapping paper, notebooks and bookmarks, among other products.

Even though he has been painting for 12 years, Monaco said he is still considered a student by Mouth and Foot Painting Artists Inc. — the lowest of three rankings. A painting of a rose rests on the floor. An incomplete painting of a sunflower is on the easel.

With the help of a teacher, Monaco has learned to paint while holding a brush in his mouth.

With an injury like his, high in the spinal cord, learning to paint was difficult, he said, but it is greatly rewarding.

“I’ve learned a lot over the years,” he said.

If it were not for the fact that New Jersey at the time offered no-fault insurance, which meant his medical bills would be paid by the insurance company for life, he most likely would have been placed in a nursing home, Monaco said. Today, under state reforms designed to reduce the cost of auto insurance in the state, medical benefits are capped at $250,000.

Monaco joked — yes, joked (he figured out years ago that feeling sorry for himself didn’t help) — that he was lucky to have been hurt when he was, and to have sustained the type of injury he did, so the medical costs would be covered.

But this part isn’t a joke: Without no-fault insurance, his whole life would be different.

“If I did not have the insurance to pay for the care, it is impossible. This is something I’m passionate about. If anyone does not have insurance, they will land in debt,” he said.

He said he is not advocating for the government to pay the medical bills for individuals. But government does have an obligation create a system that helps them pay their medical bills, to help them stay at home and out of a nursing home, he said.

“I can afford to live by myself,” Monaco said. “I cannot afford my 24-hour care. Thank the Lord, I’m able to live the way I do. It has contributed to my health.”

Confined to his wheelchair, living at home and operating from his studio, or “war room,” as he calls it, Monaco enjoys the view out his back window. He shares the company of his dogs and revels in the companionship he finds at the Jacksonville Chapel in Lincoln Park, which is so close that he can head on over as he sees fit.

His days are spent conducting business, either painting, designing Web products or engaging in conversations on financial or political Web sites. He enjoys his friends and their companionship. That is a change, something that took years to develop.

“I have to be adaptable to change, to opportunity,” he said. “You can sit and wallow in pain and feel bad or turn it into good. I focus on helping people. I go to the mission in Paterson and help out those guys. At 46, I live life defined by my disability, but I’m content.”

New technologies and therapies offer hope for the handicapped, he said, citing the work of Dr. Wise Young at Rutgers University and that of the late Christopher Reeve, the actor who became handicapped after a horseback riding accident.

Reeve believed in hardcore physical exercise, Monaco said. The actor thought that the central nervous system had a memory and that it could be recovered through hard physical activity. The result is that today, grievously injured people are placed in a physical therapy setting as soon as possible, he said.

He read the other day about a man with a prosthetic arm who was able to make the fingers move by thinking about the task, Monaco said.

There is hope, he said, even though 20,000 spinal-cord injuries occur every year.

“I would like to walk again,” Monaco said, then admits it most likely won’t happen.

He said that as a Christian, faith has been central to his mind-set and recovery.

“I need something bigger, needed a purpose in my life,” he said. “There is the afterlife. I’ll be walking after I die. That’s a purpose.”

Florence woman shot by husband vows, ‘I will walk again’