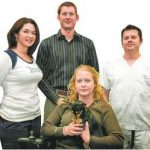 Brittney Ham has a supportive family, determination and hope, a combination that keeps the thought of walking again active in her mind.

But money stands in her way.

“If I had the money I would be walking,” Ham said.

Now 24 years old, Ham was paralyzed at age 16. She and her boyfriend got a ride home with a drunk driver who crashed, ejecting Ham from the wreckage and severing her spinal cord.

People with spinal cord injuries can improve with therapy over time, but when the cord is totally severed, as Ham’s was, patients are offered little hope of regaining sensation below the point of injury.

Ham and her mother have become experts on various complex treatment approaches that create paths for healing thought impossible before.

In 2006, they went to Russia twice, working with Dr. Andrey S. Bryukhovetskiy at NeuroVita Clinic to implant Ham’s own stem cells into her spinal cord.

“The first time I stayed for a month and went through 10 days of testing. You get two injections each time you go,” Ham said. “Follow up visits are ideally every three months, but you can return at anytime and pick up where you left off.”

Standing between Ham and her third trip to Moscow, three years later, is money. She has just under $6,000 raised and saved to go to Moscow, but in addition to the $12,100 fee for treatment at NeuroVita Clinic, she needs $3,000 for airfare for herself and her mother.

Ham uses a wheelchair and has little sensation below her chest, so she also lacks bowel and bladder control, something she hopes to regain through treatment. Her experience in 2006 leads her to expect continued improvements upon her return.

“From my four injections I have gained some new functions and sensations. The pink color has returned on the bottom of my feet. I can now feel my bladder, and the next visit should return it to full function,” Ham said. “After a ten-minute warm up, I can push bike pedals for 20 minutes on my own power. I can feel my legs and muscles tingle down to my toes when I’m on the bike.”

Ham has a new ally in her quest to get back to Moscow and continue her stem cell treatment — the professionals at Clarksville Pain Consultants. Ham has been a patient there for only a couple of months, but already has the staff crusading on her behalf.

“They were left without recourse,” Dr. Kyle Longo said about the Hams. “The treatment they need is extremely expensive, hard for anyone to manage on their own.”

Clarksville Pain Consultants is asking for donations this month on Ham’s behalf, and Longo will match the first $1,500 that comes in.

Staffers have reason to believe their efforts will be fruitful.

“Every year we have done Toys for Tots,” Misty Brown said. “Last year we raised more toys than all of Clarksville put together.”

This year, the staff decided to make Ham the focus of their Christmas fundraising.

“I am so happy to be a part of this,” Brown said. “I prayed about being able to help someone in need and God put Brittney in my life. She is a strong woman and deserves every treatment available.”

Longo said he sees the promise in stem cell transplants for Ham.

“I do believe the treatments will work. I don’t think this effort will be in vain,” Longo said. “It’s amazing she’s able to get a treatment there that we can’t give here that can help her. About two weeks ago, President Obama passed legislation that will allow this research to continue in the U.S.”

Stem cell research was once controversial because stem cells from aborted human embryos were used. But the NeuroVita Clinic re-implants a patient’s own stem cells, harvested from the bone marrow.

“We really feel like it would help her. We’re limited in what we can do here, and we want to do anything to help,” said Chris Craft, a nurse practitioner who treats Ham at Clarksville Pain Consultants. “We’re all really inspired by her story, the progress she has made.”

“We get to see people make accomplishments they have been told they will never be able to make,” he said.

By STACY LEISER
The Leaf-Chronicle