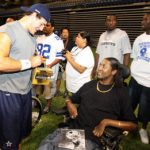 Few football games have had as much impact on as many lives as that state championship game in 2002 between Everman and Burnet. That was the game in which Everman defensive back Corey Fulbright left the field with a paralyzing injury, a vertebral fracture.

It must have been difficult at the time to imagine that much good could have come out of such a situation.

But in the stands that day, Dec. 14, at the Alamodome, were Eddie Canales and his son, Chris, who a year earlier had experienced a similar injury while playing for San Marcos Baptist Academy. Chris was at a low point, dispirited. And so his father took him to that Class 3A Division I championship game that, as it turned out, affected many people in ways they could never have anticipated.

After he broke up a pass from Stephen McGee, Fulbright lay motionless. When he was removed on a stretcher, it must have become apparent that his injury was serious, and for two people in the stands the scene must have brought back unbidden some painful memories.

“Chris turned to me and said, ‘We have to do something; we have to help,’ ” Eddie Canales recalled. “And we did.”

After the game, Canales and his son went to the hospital to visit with Fulbright’s family. Nobody’s ready to deal with such circumstances when they suddenly drop out of nowhere; nobody’s prepared to handle a debilitating injury and all that it might require.

That’s how Gridiron Heroes began, with the elder Canales as the founder and director. And it quickly grew so that it now provides much more than advice and hope.

The foundation has helped 18 former high school football players who have had spinal cord injuries, including Corey Borner, a DeSoto defensive back, who was injured during a practice before the start of football season.

Gridiron Heroes often works, if the school allows it, with coaches and administrators to raise money for the players and their families.

“Unfortunately, we’ve been very busy,” Canales said, pointing out that players generally need $150,000 to $500,000 in assistance in the first 100 days following the injury. The loss of mobility is only the most visible difficulty. People with spinal cord injuries often experience problems breathing and sleeping as well.

Their homes and the family vehicle may have to be remodeled to accommodate a wheelchair. Some injured players need a specially designed mattress that costs $15,000.

Unlike professional athletes or even college players, high school youngsters who are seriously injured often get overlooked, Canales said, or even forgotten. And so one of the foundation’s goals, he said, is to raise awareness.

“It’s a long-term commitment we make,” Canales said, pointing out that Gridiron Heroes sends gift certificates to the families each month and continues to assist the 18 former football players as needed.

Three of them are walking again.

Before the start of the season, 14 of the Gridiron Heroes players attended a Cowboys practice at the Alamodome, where McGee and Fulbright met again and where two former DeSoto players, Patrick Crayton and Borner, could talk a little football.

“We still love the game of football,” Canales said. “We don’t want to deter anybody from playing football. We’ve seen firsthand the strong attitude that coaches and football can instill in these young men.”

If he could, Fulbright said he would play football again. He said he still loves the sport and always looks forward to attending games. Whether it’s derived from his football experiences or from some inner source, Fulbright, who said he’s “doing great,” certainly evinces the sort of strength Canales said he admires.

Fulbright is busy working to raise money for a rehabilitation center that will be in Everman, where “people in my situation,” he said, “can have therapy.”

In the meantime, Fulbright said he has a message not just for people with spinal cord injuries but for everyone: “Keep your head up.”

How to help Visit gridironheroes.org to donate.