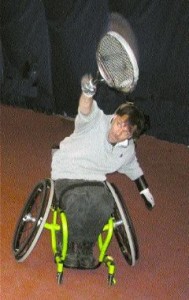 “These things are really not accidents. Ninety per cent of injuries are preventable. It’s a state of mind.”

This may sound like an odd thing for a hospital chaplain to say, but Chaplain Dieleman believes recognizing injuries for what they are helps people to accept their condition and move on. He knows this from personal experience.

Back when he was 22, Chaplain Dieleman got into a car wreck. He had just graduated from Seneca College’s business administration program, and was driving to a friend’s cottage. He was drinking, speeding and not wearing a seatbelt — a potentially lethal combination. It wasn’t long before the car flipped and he broke his neck. He survived the crash but was left a quadriplegic.

It took Chaplain Dieleman awhile to get his life back on track, but he did. He went to York University for economics, then got his masters of theology degree at McMaster University. Now he works part-time as a chaplain, which allows him time to pursue his passion — wheelchair tennis.

Chaplain Dieleman is on the national wheelchair tennis team for the second year in a row. He is ranked 22nd in the world and second in Canada in the quadriplegic division. Wheelchair tennis is played on regular-sized courts and has most of the same rules as regular tennis. The only visible differences, besides using a chair, are that the ball is allowed to bounce twice, and most people in his division have to tape the racket to their hand because of paralysis in their fingers.

Chaplain Dieleman has combined his passion for wheelchair tennis with his desire to help people deal with their injuries. Every week he runs a tennis session where other people with spinal cord injuries come out for some competition, physical activity and peer support.

“I’m getting other people enthused about something I love, and helping people see that life goes on,” said Chaplain Dieleman. “We’re not talking about meds and bowels on the court, we’re just concerned with hitting the ball and whopping our opponent.”

As it stands, Chaplain Dieleman is ranked high enough to achieve his goal of making it to the 2008 Paralympic Games in Beijing. But he’ll need to spend the next year fighting to place high in tournaments if he wants to maintain his position. And while he may have the skills to get there, that’s only half the battle. He also needs the funds.

Air Canada’s Aeroplan miles program has set up a charitable account to allow people to donate their Aeroplan miles to wheelchair tennis. Chaplain Dieleman, and other national team wheelchair tennis athletes, can use these miles to travel to a number of tournaments, including Australia, Florida and Sweden in 2007, and if all goes well, Beijing in 2008.

The account will only be open until Dec. 18, 2006, so Chaplain Dieleman hopes he can garner as much support as possible over the next few weeks. To donate Aeroplan miles, you must obtain a form, write down the number of miles you would like to donate, sign it, and return it to Chaplain Dieleman.