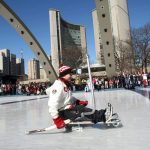 TORONTO — Three years ago, Master Cpl. Jody Mitic stepped on a landmine in Afghanistan and along with losing both of his legs, he also thought he would never be able to play sports again.

But on Friday Mitic — who has run in marathons, snowboarded, hang-glided and scuba dived since his accident — was one of 40 chosen to carry the Paralympic torch in Toronto.

Before the relay, the double-amputee said he planned on holding the silver torch high, showing himself as an example what is possible for disabled Canadians.

“My attitude has always been ‘can do,’ ” he said, dressed in the signature blue jumpsuit of the Paralympic Winter Games.

“We should always think we can do it and this is how we’re going to do it. It’s a long process but it’s part of the healing.”

It will take 10 days for the Paralympic flame to be walked, jogged and run through several communities across the country before it is used to light the cauldron at Vancouver’s BC Place Stadium on March 12.

The flame will arrive in Victoria Saturday.

This is the first time the Paralympic Winter Games have been held in Canada.

Mitic, a Brampton, Ont., native, had been thinking for a few days about how he was going to run the relay.

“I had secretly hoped I’d get a chance to do this,” he said. “I’m going to have my running legs on so there’s going to be some skipping and jumping. I’m not sure but maybe I’ll do a headstand, too, if I’m allowed.”

Unlike at the Olympic Games where the flame remains lit throughout 17 days of activities, the flame is extinguished each night and reignited every morning by members from the local Aboriginal community. It will pass through the hands of more than 600 torchbearers before reaching Vancouver.

On Friday, several elders, youth, Aboriginal dancers and drummers from the Toronto Native Centre brought the flame downtown after making a special stop at the Hospital for Sick Children.

The flame was then passed to members of a youth Nordic sledge hockey team who skated with it around Nathan Phillips Square before handing it off to a torchbearer.

Hundreds, basked under sunshine, waved Canadian flags and chanted: “Go Canada Go!” as they waited for a glimpse of the flame.

Flavio Pagliero said he was there to support his friend, Richard Vanderwal, who was one of the torchbearers chosen for his role in Rick Hansen’s foundation.

“We became friends when he came to talk at a hospital as part of a peer-support program about how to live your life with a spinal cord injury,” said Pagliero, who became wheelchair-bound following a car accident eight years ago.

“It was so important for them to be here today,” said Nassirzadeh, who had two Canadian flags painted on her cheeks. “They were so excited about the Paralympics and coming out and supporting the athletes.”

Mark Pompeo was also part of the crowd waiting to see the torch run. Although he admitted he wasn’t a big sports fan, he came as a proud Canadian.

“I wanted to show off my pride for the country,” the 26-year-old said, with a giant flag draped on his shoulders. “It’s very important because sports for Canadians with disabilities has a lot of barriers and obstacles and I came to show my support for these athletes. They have every right like the able-bodied athletes to compete.”

Exercise brings hope to those paralysed by spinal injuries