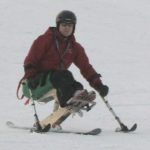 From school project to the Paralympics

A sit-ski that started as an extracurricular project for some University of Calgary students will be on display at the Paralympics in Whistler, B.C., this week and may soon make skiing more accessible for disabled people.

The germ of the idea for this innovative new sit-ski came from a lift line conversation in 2006, remembers James Chew. Then an industrial design student working on his master’s degree at the University of Calgary, Chew was introduced to some members of the Calgary chapter of the Canadian Association for Disabled Skiing that his friend Derek Gratz had met in a lift line at Canada Olympic Park. The disabled skiers complained about the high cost of sit-skis, which retail in Canada for about $4,000 to $7,000, and the difficulty in maintaining sit-ski equipment, most of which is made in the U.S. or Europe and has to be shipped to a distant factory for any major repairs.

“Cost was definitely a problem, but wrapped up in that was maintenance issues,” Chew says. “They’re hard to tear apart and when they break, they’re out of commission for some time.”

Chew soon learned that these problems were faced by 300 to 400 disabled skiers across the country who use the sit-ski to overcome physical challenges such as leg amputations or a spinal cord injury that has paralyzed them below the waist. This small but enthusiastic group was looking for a less expensive domestic product so easy to fix that major repairs could be done by any mechanic. So Chew and a few students in his university program got to work.

By 2007, the group had come up with a new design for a mono-ski (a sit-ski that rests on one ski) that soon earned them $30,000 in grant money from the federal government’s National Resource Council to develop their idea into a working product. Chew then made a business plan and teamed up with some fourth-year students from the University of Calgary’s Schulich School of Engineering to fine-tune the structural components of the sit-ski. The group came up with a sit-ski made of a plate-aluminum frame and just seven pieces attached by store-bought fasteners in a simple way — something a disabled skier can easily disassemble for minor repairs.

And cheaper. At an expected sale price of about $2,000, the new sit-ski would be two to three times cheaper than most models in the market today. A sit-ski buyer would still need to pick up a regular alpine ski with a binding and two “outriggers” (a pole with a special grip and small ski attached to the bottom that a sit-skier uses to keep their balance while turning), which would cost at least a thousand dollars when bought new. But members of the Calgary chapter of CADS expect the far-less-expensive sit-ski will remove the biggest barrier to attracting more disabled people to their sport.

“It makes it much more affordable for an individual who just wants to be a recreational skier with their family, and also for small groups that want to start a sit-ski club,” says Tony Crook, the assistant ski school director for Calgary CADS.

Crook and a few other Calgary CADS instructors who test-piloted the prototype came away from the experience pleasantly surprised with its performance, considering its budget price.

“We’re all really impressed with it,” Crook says. “It’s a straightforward design that seems to work quite well at a recreational level.”

After their sit-ski prototype earned good reviews from Calgary CADS instructors, Chew and team members Gratz and Jeremy MacLennan were so encouraged they incorporated under the name Incline Design in the summer of 2009.

“It’s been skied quite extensively, and we’re pretty confident with the product,” says Chew, who is in charge of product design for Incline Design.

Chew admits there are “still some things to flesh out in terms of safety and testing.” But Incline Design has already been invited by the Whistler Adaptive Sports Program at Whistler-Blackcomb Resort to show off its prototype at the Vancouver 2010 Paralympic Winter Games that will be held Friday until March 21 in Vancouver and Whistler. The international competition will feature about 650 physically challenged athletes from more than 40 countries.

“We’re going out there to share it with the world,” Chew says. “People always look to the Paralympics to define the sport.”

After the Paralympics, Chew, 30, and his young team expect to finish this work and start selling their sit-ski to the public by September. Incline Design’s prototype is already attracting interest from disabled ski and community associations across the country, with at least two deals in the works for the sale of 15 sit-skis.

“We’re hoping to support the growth of the sport,” Chew says with a smile. “We think there’s a very good opportunity to get our sit-ski onto ski hills right across Canada within the next few years.”