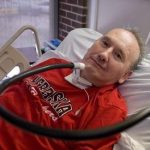 He was an auto mechanic and loved to fix things. Townspeople depended on him and he always delivered, every time, even if it meant skipping lunch or Christmas dinner to change a friend’s tire.

He married his high school sweetheart, raised three sons and owned the only repair shop in Butte, Neb. He was an active man, piloting single-engine aircraft through the 1980s until it got too expensive.

Transitioning from flying to cycling, he went on to complete 15 jaunts across the state in the Bicycle Ride Across Nebraska.

Now he mostly lies in a bed at Lincoln’s Madonna Rehabilitation Hospital, paralyzed from the neck down because of a cycling accident.

He hit a crack in a railroad crossing the size of a bike tire. He was thrown over the handlebars and onto his head, injuring his spinal cord. He was wearing a helmet and going less than 10 mph.

It was the evening before the start of BRAN in 2006, and he was just three blocks from his camp site in Broken Bow.

Schroetlin, now 58, knows there are people who have it worse, like children with the same kind of spinal cord injury who haven’t had the chance to live their lives yet.

“I’ve got a lot of happy moments, all around,” he said.

His thin gray hair rests neatly on top of his head as he smiles, speaking and breathing softly with the help of a diaphragmatic pacer he received last July.

Compared to the three years he was on a ventilator, being on the pacer is like the difference between night and day.

It “feels more normal,” he said.

The ventilator blew air directly into his lungs through his mouth.

The small plastic pacer, powered by batteries lasting 500 hours, administers shocks through a sensor connected to wire implants below the chest. The diaphragm is forced to contract, or inhale, allowing Schroetlin to exhale naturally.

Breathing through his nose again, his sense of smell has returned. He has increased mobility because he’s not connected to tubes. He is less prone to infection, making trips back home to Butte much easier.

His hometown of about 400 people held a fundraiser right after he was injured. Most of the residents turned out on bikes and rode for the cause. On the side of the road was a big sheet mounted on stacks of hay reading: “SORE LEGS? THANK GOD. PRAY FOR LARRY.”

Last July, Madonna flew in surgeons from Cleveland instead of transferring Schroetlin out of state. Once the surgeons arrived, they trained the Madonna staff, making Schroetlin the first person to undergo the procedure in Nebraska.

In 2005, the National Spinal Cord Injury Database estimated that 225,000 to 288,000 individuals in the United States were living with spinal cord injuries, with about 11,000 new cases each year.

Approximately 500 cases like Schroetlin’s occur each year that would be eligible for diaphragmatic pacing.

Once a man who did everything for himself and never asked for help, he is now dependent on others. He says he’s not lonely because there’s always something to do or people around.

Molly Nance, a spokeswoman for Madonna, said Schroetlin has never given up.

“All of us who work with him were so excited to give him this next level of independence,” she said.

Three years ago his wife of nearly 40 years, Patty, got a part-time job at Madonna. The job provides insurance benefits, and she can see Larry whenever she wants.

“I was living here anyway,” she said. “He has always been there for me. I told him it was my turn to take care of him.”

She said some days are better than others, but with the help of faith and prayers, they always seem to manage.

“We go one day at a time, sometimes an hour at a time,” she said.

Friends who met Schroetlin on the bike ride continue to write and visit him regularly.

Merlin and Darlene Wright, of Peru, Neb., became friends with Larry on BRAN. Merlin writes to him at least once a week.

“He’s been an inspiration to us,” Wright said. “I consider his life to be an example for me not to complain.”

Patty Schroetlin said the couple’s love for each other has changed but grown deeper since the accident. He loves his grandchildren, and he prays more than ever.

They believe there’s a reason everything happened the way it did.