Ryan Creech accepts injury but doesn’t surrender to it 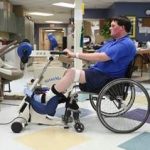 Creech — injured three years ago in an all-terrain vehicle accident — runs the telephone switchboard at University of the Cumberlands, is studying for a master’s degree in teaching, gives guitar lessons and volunteers at his church.

He’s getting therapy at Cardinal Hill Rehabilitation Hospital in Lexington and fighting to regain as much leg movement as possible.

A spinal cord injury “is a tough thing to deal with. A lot of people are sad and down about it,” said Creech, a 25-year-old from Williamsburg. “I try to just accentuate the positive. I ignore the negatives, just pretend they’re not there.”

Creech said he still has his intellect, his family and the girlfriend he had before the 2007 accident on a dirt bike track in North Carolina.

He also has hope.

When it comes to health issues, “Kentucky gets somewhat of a bad rap,” he said. “But Kentucky is really on the cutting edge.”

In the past three years, through therapy that includes pedaling a special stationary bike, Creech’s condition has improved significantly. While he still gets around in a wheelchair, his right leg now moves pretty well.

His injury was once considered “complete.” But he said he and his doctors can envision him walking with leg braces someday.

“It’s just a matter of not giving up,” Creech said. “But even if I don’t get any better, I’m OK with that. I’ll take it. I’m very comfortable with myself the way that I am, and I don’t have to change to make myself happier.”