After dire diagnosis, man with spinal cord injury tells his story through blog 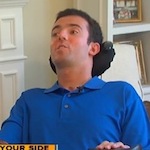 As a junior at the University of Cincinnati, Ryan Atkins was “on top of the world”. He had a full ride scholarship, a good internship and everything that comes with college life.

“I thought at 21 years old, what could be better? And all of a sudden I’m driving with some fraternity brothers and lost control of the car,” explained Atkins.

“Next thing I know, I broke my neck and I was in the hospital for about four months and paralyzed below the shoulders, and not really given much hope from doctors, and pretty much told that this would be my life.”

Atkins had fractured his C3/C4 vertebrae, causing a serious spinal cord injury. After months in the hospital, he returned home and began intense physical therapy.

“Pretty quickly I realized as hard as I tried, I physically would not be able to overtake the paralysis on my own, and a miracle is what I would need,” said Atkins.

Four years, dozens of those intense physical therapy sessions, and hundreds of prayers later, the now 25-year-old has found himself on a journey he never expected.

The self-confessed closed book decided to open up.

“I thought I may as well share what God’s done in my life over the past few years,” said Atkins.

In September, his blog went live with the help of voice activated computer software.

Flat On My Back started as a way for Atkins to keep friends and family updated on his progress, which he’s made a lot of. In a video from 2012, you can see Atkins moving his feet.

The inspiring posts quickly started catching the attention of others facing adversity.

“People from different backgrounds, I’ve interacted with people dealing with depression, physical ailments, relationship problems, and really coming around the common ground that God provides a peace that transcends all understanding.”

He says he has one main message for those logging on.

“There’s no situation that’s beyond redemption.

“I really found that when I was at my lowest points of dealing with being paralyzed below the shoulders and not given much hope, and feeling as if the world was moving on without me that, God really met me where I was and has provided me with the peace that has just been incredible and just supernatural and I’m really just excited about what the future holds.”

Atkins updates his blog weekly while continuing the fight to regain his strength. He says a book could be in his future.

To quote Ryan, “This story is not over yet.”

Read more from Ryan at www.FlatOnMyBack.com .

What is a spinal cord injury- Finetech Medical