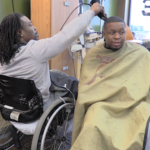 Getting shot six times and becoming paralyzed from the chest-down didn’t stop John “So Icey John” Sharp from becoming one of the best barbers in town.

“I got shot up being at the wrong place at the wrong time,” Sharp, 28, says, adding he wont let the circumstances prevent him from continuing his life.

Today, Sharp cuts hair from his wheelchair at Englewood’s Pro-Line Barber and Beauty. In the last seven months, he’s developed a strong client base, which he’s proud of.

In this video, John Sharp, a barber at Pro-Line Barber and Beauty in Englewood, opens up about overcoming adversity after getting shot six times. (Hannah Gebresilassie/MEDILL)

Sharp was walking to his aunt’s house when violence broke out in the streets of Morgan Park in 2010. That night, a gunman put six bullets in his body and left him with a life-changing spinal cord injury.

“I still got a bullet by my spinal cord,” Sharp says. “I used to be paralyzed from my chest down. I had no feeling at all for almost a year and a half.”

Sharp lost his mother three months before the shooting incident and his father passed away one-and-a-half years later. His early twenties presented devastating trials, yet he prevailed and overcame the adversity to do what he loves.

“All you have to do is just watch the man cut,” says Bryant Jones, Pro-line artist and Sharp’s coworker. “The zone he gets into and the love he has for what he does, you can’t beat it.”

Many in the Englewood community say Sharp’s story is inspiring.

“I got something to prove,” says Sharp. “I gotta show my mama and daddy this is how it is. I’m still going to hold it down.”

Scientists Connect Neurons in the Lab for the First Time