Legacy of a fearless fighter 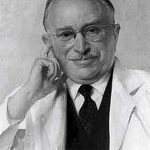 The Paralympic Games were the creation of one remarkable man.

It was on November 9, 1938, Kristallnacht in Germany, when Jewish property was destroyed wholesale and about 30,000 Jews arrested, beaten, murdered or dragged off to concentration camps, that Ludwig Guttmann, the medical director of the Jewish Hospital in Breslau, instructed his staff to admit without question anyone arriving that night.

”The next day the Gestapo came to see my father, wanting to know why so many admissions had happened overnight,” Guttmann’s daughter, Eva Loeffler, recalls. Guttmann took them around all the new ”patients”, inventing diagnoses. ”My father was adamant that all the men were sick … He took the Gestapo from bed to bed, justifying each man’s medical condition.”

In his unfinished memoirs, Guttmann recalls that 60 of the 64 admissions from the previous night were saved from the concentration camps. Expecting to be hauled off himself, he had donned boots and a coat before setting off to the hospital.

The incident was one of several in which Guttmann risked his life for his compatriots, as the noose tightened around Germany’s Jewish population. It illustrates the qualities of this formidable neurosurgeon, according to those who knew him: compassion, a strong sense of justice and immense courage. They were qualities that would help transform the lives of thousands in the years to come – first in Britain where he and his family arrived as virtually penniless refugees the following year, and eventually, around the world.
Advertisement

Guttmann is best known as the visionary founder of the Paralympic Games. It is thanks largely to him that, from a small archery competition in 1948 involving 16 paralysed British war veterans, evolved a major international sporting event featuring elite athletes with all kinds of disabilities. Yet the achievements of this clever, humane man were not just in the field of sport.

Asked to run a spinal injuries unit at Stoke Mandeville Hospital by a British government anticipating the worst as the second front began in 1944, he single-handedly revolutionised the care of paralysed servicemen. Until his arrival they were left to rot, sometimes literally, from bedsores. Mortality was high, with 80 per cent dying within a year of their injury. Those who did survive were doomed to spend the rest of their days hidden away in long-term institutions for ”incurables”.

Guttmann was to change all that. In an era when men suffering horrible injuries were delivered to hospital in coffin-shaped boxes, treated as terminal cases and hidden from sight, he gave his patients hope for the future.

Guttmann himself understood something about loss. Born in 1899 into an orthodox Jewish family in upper Silesia (now part of Poland), he became a pioneering neurologist, only to be dismissed as a ”non-Aryan” from his post at Breslau in 1933.

In 1938, in line with new racial laws, his licence to practise medicine was withdrawn and he was allowed to treat Jews only. Yet his reputation was such that the following year he was asked by the Nazis to fly to Lisbon to examine a friend of the Portuguese dictator, Salazar, thought to be suffering from a spinal tumour.

In exile in Britain, Guttmann spent several years doing research at Oxford’s Radcliffe Infirmary, before being asked to head the new spinal injuries unit at Stoke Mandeville, one of several being set up by the government.

”D-Day was the real prompt,” says Harriet Davison, producer of a new BBC film about Guttmann. Spinal injuries were then a backwater. ”The attitude was, no one else would do it, so let this eccentric German.”

Guttmann’s first encounter with spinal cord injury had been as a teenage hospital orderly in Silesia when he met a miner paralysed in an accident. The young Guttmann could hardly believe what he saw: a strapping, six-foot man, encased in plaster and kept behind screens, where he developed urinary tract infections and sepsis. Five weeks later he was dead. According to Guttmann’s memoirs (quoted in Susan Goodman’s biography Spirit of Stoke Mandeville, now out of print), the case remained ”indelibly fixed” in his memory.

He was to see many such ”hopeless” cases at Stoke: heavily sedated men, kept on their backs for months, often immobilised in plaster to help ”stabilise” fractures, they developed open sores the size of dinner plates; permanently catheterised, they developed bladder and kidney infections. Many died within months.

”No one wanted these patients, who smelt of urine and whose flesh was rotting,” says Dr Allison Graham, the unit’s current director. ”They were left in bed for months at a time. Their pressure sores were ignored on the grounds that spinal patients had no sensation. The attitude was, what’s the problem?”

A BBC drama concentrating on Guttmann’s first years at Stoke reveals how he overturned this fatalism through a combination of charm, obsessiveness and sheer bloody-mindedness. There were fierce battles with nurses, other doctors and the patients.

Bringing together new ideas on rehabilitation from the US and Europe, Guttmann got patients out of their plaster and off their sedation or ”gloop” (which caused complaints), and made them sit up (which made them vomit at first). And he insisted that they were ”turned” every two hours at night to prevent pressure sores. Gradually, an 80 per cent mortality rate was turned into an 80 per cent survival rate.

A quartermaster was seconded from the army to start exercises to strengthen the men’s upper bodies. In her book, Goodman describes how skills were introduced to make them employable, including woodwork, watch repair and typing. Guttmann’s aim was to send the men out into the world ”with ambition and purpose” and with the same responsibilities, such as paying tax, as anyone else.

Gradually ”Poppa”, as he used to be called, won his staff over: nurses who had previously drawn lots to avoid the unit, ”they were embarrassed to be with these dying boys”, Davison says, would later fight to work there.

Two of the patients in the BBC film are inspired by Guttmann’s medical notes. Sergeant Wynn Bowen hides his misery behind a laconic, caustic wit: the regular turning at night is, he says, ”a bloody pantomime”, while he describes Guttmann as ”Hitler’s secret weapon”. Bowen is married but would rather divorce than face potential sexual failure. Telling him ”there are many ways to skin a cat”, Guttmann forces him to go home one weekend; he returns triumphant.

Getting wheelchair patients to play competitive sport was one of his most inspired ideas. Guttmann saw sport as a way to regain fitness, boost self-esteem and restore personal dignity. As the film tells it, the idea came to him after seeing patients frantically propelling their wheelchairs while trying to hit a wooden puck with upended walking sticks in an attempt at polo. Organised sport became a mandatory part of the rehabilitation program.

In 1948, on the day the Olympics opened in London, Guttmann organised the first Stoke Mandeville games for the paralysed. In 1960, his vision of a true Paralympic Games was realised: 400 wheelchair athletes from 23 countries paraded through Rome’s Olympic Stadium, competing in the same sports as able-bodied athletes. In this year’s Paralympics, more than 4000 athletes from 147 countries will take part.

Guttmann was knighted in 1966, the year he retired from Stoke, internationally recognised in the management of spinal injuries. He stayed involved with the Games and travelled the world lecturing on spinal cord injury. He died, aged 80, from heart failure in 1980; Stoke Mandeville’s stadium, opened by the Queen in 1969, was named in his honour the same year.

”The sports legacy is what he is best known for,” Graham says. ”But none of those achievements would have been possible without the transformation in care of spinal cord injuries he introduced.”