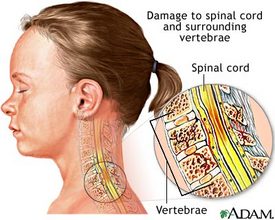 Individuals between the ages of 16 and 30 are most likely to suffer from spinal cord injuries and the male population is at a greater risk than women, 80 percent more. In technical terms, only the lower body of a Paraplegic is paralyzed. Other, more severe injuries result crippling most of the body, including arms and legs, called Quadriplegia or Tetraplegia.

Most often, these accidents occur in automobile accidents, falls, sports games and certain areas of construction or heavy labor work. The story of rugby player, Duane Morrow, is not uncommon to spinal cord injury lawyers. During a game, he suffered a neck injury wherein after, he experienced pain in his neck and shoulders. But the real bad news did not come until the next morning when Mr. Morrow was sitting in a business meeting. He confirmed that he lost feeling in his legs and shortly after, lost feeling from his chest down. After serious surgical attempts and much experimentation with new technologies, it appears that Morrow might have a chance at normal life again.

The severity of these injuries should never be overlooked. Contact an experienced Dallas spinal cord injury lawyer.