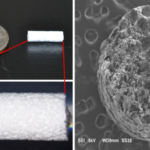 Patients suffering from complete spinal cord injuries have little to no treatment options that provide meaningful improvement in patient outcomes.

The highly porous device, smaller than the size of a quarter, is made up of Poly(lactic-co-glycolic acid) [PLGA], the same material as absorbable sutures, and two percent Ply-L-Lysine [PLL], which acts as a cellular adhesive, CEO Mark Perrin told Bioscience Technology during an interview at the BIO CEO and Investor Conference in New York City in February. The polymer scaffold eventually degrades over several weeks.

A clinical trial involving 20 patients is currently underway, and initial results have been promising.

Perrin explained that when spinal cord injury happens, there is tremendous force against the spine, which then pushes up against the cord and hemorrhaging and swelling begins inside the cord. Then a necrotic process, or premature cell death, takes places. Inside the spinal cord there is a butterfly shape made up of gray matter, and outside of that is white matter. White matter is very important because that’s where the axons, or what Perrin calls the ‘super highways’, go from the brain down to the lower extremities.

He showed a video in which doctor Nicholas Theodore from the Barrow Institute in Phoenix, implanted the Neuro-Spinal Scaffold into a patient. The spinal cord is wrapped by dura, a protective tough leathery substance around the cord, which is tact back and then a slight incision is made. The video shows liquid necrotic material spill out, and a cavity is seen.

“To see a little hole there was really quite remarkable,” Perrin said.

Theodore uses intraoperative ultrasound to measure how big the cavity is inside the cord, and then the scaffold, which is one centimeter long but can also be trimmed, is gently inserted.

Acting as a 3-D bandage of sorts, Perrin says what’s remarkable is the biological cascade that happens after implantation.

“In the rat model, if you don’t do anything you this big, liquid-filled cyst with a scar and you get secondary damage as this gets bigger and pushes up against the white matter,” Perrin said. “But if you put a scaffold in, you reduce the size of this cyst, you get more white matter and you have this remodeled tissue.”

The remodeled tissue is not just scar tissue, but is actually highly neuropermissive, Perrin said, and they found in animal models that there was a large amount of new neuronal growth.

In addition, they observed regrowth of insulating myelin around the ends of the axons.

All of the patients in the current INSPIRE study were implanted with the device within 96 hours post-injury and all have complete spinal cord injuries, so no motor, sensory or autonomic function below the point of injury.

The critical endpoint of the study is if any motor sensory function is regained within six months of implantation. Historically, conversion from complete paralysis to partial after spinal cord injury is about 15 percent Perrin said.

The company hopes to complete enrollment of the other nine patients by the end of June so that they can have the last six-month data point of the final patient in December.

The Food and Drug Administration has agreed that InVivo can submit their application on a rolling basis, which is a big plus Perrin said, as earlier modules, such as preclinical data can be reviewed and completed by the time the clinical portion is submitted.

The main goal for 2017 is to complete the INSPIRE study, and then submit the Humanitarian Device Exemption application by the first quarter of next year, Perrin said.

One thing Perrin stressed, was how vital it is to get treatment options to spinal cord injury patients. He pulled up a picture of the patient seen earlier in the implantation video, walking with braces. While the patient must wear braces and use a walker, the company is being told that he can walk about a quarter mile a day now. The patient went from first feeling his hips, to now feeling ankle contractions.

“This says it all,” Perrin said. “That’s why we’re in business and that’s the most important thing is if we can help these patients who up until now have had absolutely nothing.”

Hurricane Relief for People with Disabilities

UCLA gets $6 million to study new ways to restore hand...