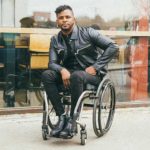 From giving motivational talks to making people laugh as a “sit-down comedian,” Jessie Chin shares why his paralysis can’t keep him from living his best life.

In the summer of 2012, Jessie Chin had just finished his freshman year of college and was looking for some summer fun. He and his friends decided to take a ferry from Staten Island to New York City for the day.

“On the ferry I got in an argument with a guy, and the next thing you know he had a gun and shot me in the back,” Chin told Healthline.

He was rushed to the hospital, where he was treated for the injury.

“I remember waking up the next day with a lot of family and friends there. I had machines down my throat and a feeding tube. I eventually went down from 180 pounds to 100 pounds,” Chin said.

The incident left him paralyzed from the waist down at 18 years old.

“It was tragic and traumatic, but there’s a positive at the end of the day,” Chin said. “When I got injured, the first thing I remember the doctor telling me is that I’m not going to be able to do this or that, but I had a chip on my shoulder. I thought, ‘You’re not going to tell me what I can’t do.’”

Peter Wilderotter, president and CEO of the Christopher & Dana Reeve Foundation, resonates with this sentiment. He says the word “can’t” is used in reference to those living with paralysis far too often.

“Living with paralysis comes with challenges, but most of the limits our community faces have been manufactured and perpetuated by stigmas and stereotypes. Individuals living with paralysis can do anything and be anyone if we offer them the correct support, representation, and inclusion,” Wilderotter told Healthline.

As hard as it was to adjust to a new way of living, Chin says he put himself in uncomfortable situations until he was comfortable.

For Chin, this meant continuing to do the things he loves.

“For example, I liked playing basketball and still do, and I liked going to parties and clubs, and I still go because that’s what I did before,” he said. “You can’t let fear stop you from doing the things you love and did prior to the injury.”

Chin shares this message with people he mentors who are newly injured or dealing with paralysis.

“I tell them that everyone’s process is different. There is no time frame for when you adjust to being in a wheelchair, but you learn to adapt. Every day is a learning experience, and everyone has to go at their own pace, but you still have to go out and do the things you did before,” he said.

For many people living with a disability, facing depression and mental health issues can make carrying on difficult.

“Think of how your life is changed in an instant following spinal cord injury. You are grieving your former life while trying to establish a new normal for you and your family/loved ones. And you are navigating a world that is not flat with physical and emotional barriers, all the while dealing with pain and other complications that tax your body,” Wilderotter said.

While having a good support system of family and friends helps Chin manage the mental and emotional effects of his condition, he says having a positive outlook helps him most.

“When you become positive every day and look at the positive in everything you do, it becomes a habit, so any negative thought I have, I shake it off. This became a habit for me — to wake up and be grateful for the things I can do.

“I’d think, ‘I can’t use my legs, but I have full use of my arms. I can still drive and live independently.’ I don’t look at the things I can’t do. In a way, the wheelchair is a blessing, as tragic [as it was, because it] gave me a strength and confidence that I don’t think I had before my injury,” Chin said.

As the face of the Christopher & Dana Reeve Foundation’s new campaign, “See Us,” Chin is using his positivity and confidence to help challenge the stigmas and prejudice faced by individuals living with paralysis.

The campaign aims to gather the largest collection of stories from the 5.4 million Americans living with paralysis to learn how they want to be seen, approached, and understood by the able-bodied world.

“There are lot of people in my situation who are going through life and they just want to be seen as a person. They are fathers, brothers, sisters, uncles. The campaign is about seeing the person, not the disability, and [getting people to understand] that there’s no difference between an able-bodied person and one with paralysis,” Chin said.

“We have to kill the stereotype that people with disabilities can’t function in society,” he added.

While people like Chin work to remove stigma by sharing their stories and being themselves, Wilderotter says the foundation also works to engage policymakers and corporate leaders to foster meaningful, authentic inclusion.

In addition to the campaign, Chin spreads his positivity in other ways. As a model for adaptive clothing, he appeared on the television show “Good Morning America” wearing adaptive clothing from Tommy Hilfiger.

“The clothes help people with disabilities be independent. The shirt I had on for ‘Good Morning America’ had magnets on it, so if you can’t use your arms, you can still button your shirt,” he said.

In all he does, Chin does so with a sense of humor. In fact, he calls himself a “sit-down comedian.” In March 2019, he performed a comedy show that sold more than 200 tickets.

“I’m so excited that there’re both people in wheelchairs and able-bodied people there laughing under one roof. That was a beautiful thing,” Chin said.

His jokes are based on his everyday life experiences with a bit of exaggeration.

“I have tons of jokes of me being in a wheelchair and making light of it. You can’t go through life being angry at certain situations. I don’t want to be that bitter person because of my situation. That’s not who I am,” Chin said.

“Humor has a way of getting people to have conversations about uncomfortable situations and put them at ease,” he said.

Chin gives motivational talks to school-aged kids about not giving up and the importance of education. He hopes to continue to inspire young people as a high school counselor.

In May 2019, Chin graduated college with an anthropology degree and plans to obtain a master’s degree in counseling.

“I’ve always been good talking to kids. I know I can make a big difference in their lives because I’m a person in a wheelchair who hasn’t given up, and I can guide them to do the same,” he said.

His sentiment stays true whether he’s working on comedy, modeling, motivational speaking, or the “See Us” campaign.

“I want people to see that just because I’m in a wheelchair, doesn’t mean my life stops. I’m just trying to live my life by being myself,” Chin said.

By: Cathy Cassata
Cathy Cassatais a freelance writer who specializes in stories about health, mental health, and human behavior. She has a knack for writing with emotion and connecting with readers in an insightful and engaging way. Read more of her work here.