Here’s what works to prevent bedsores

Q: My father developed some serious bedsores while he was in the hospital after surgery. Why do bedsores occur, and can they be prevented?

A: Bedsores can be painful, and sometimes even deadly. Two-thirds of all bedsores occur in people over the age of 70, mainly because older people are more likely to have health problems that put them at risk. People with spinal cord injuries are also likely to develop bedsores because of the time they spend in one position. When Christopher Reeve, the actor who was paralyzed in a horseback riding accident, died in 2004, news accounts said he died from a bedsore-related infection.

Immobility is the culprit. Most of us don’t realize how much we move around while we’re sleeping. Our bed partners may not agree, but it’s a good thing we toss and turn. That movement continually redistributes the pressure between our bodies and the mattress. But when we’re confined to bed because of illness or injury, or while we’re under anesthesia for an operation, we may move very little, if at all. As a result, pressure builds up on specific areas of the body, particularly those where the bones are prominent. If you’re lying on your back, the most vulnerable areas are at the lower part of your back near the buttocks and your heels. If you’re on your side, it’s your hip and ankle (see illustration). When we do move, or are moved incorrectly by a caregiver, friction may add to the problem of pressure. 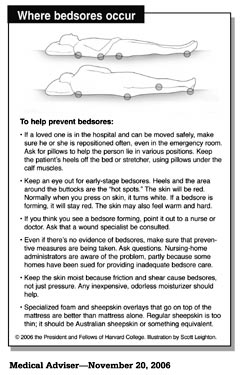 In just a couple of hours, that pressure can squeeze shut the tiny vessels that deliver blood to the skin and underlying tissues. Without fresh blood to bring in oxygen and flush out waste, skin and other nearby tissues falter and may eventually die.

At the very least, bedsores get in the way of recovery, so a hospitalization or a stay in a Rehabilitation center lasts longer than it might have. As with any other type of open wound, bedsores create a ready opportunity for infections that may spread to the surrounding skin, the deeper tissues and bones, and the blood. And to make matters worse, infections that are resistant to antibiotics are becoming more common every day. The breakdown of tissue from large bedsores can also lead to fluid and protein loss, leaving patients dehydrated and malnourished.

Any of us can develop a bedsore if we’re stuck in bed or in a chair. But the risk is much lower if we can move, even just a little. People change positions more or less automatically if their brains are able to process the signals that warn pressure is mounting on an area of the body. People who are unconscious or suffering from confused thinking may miss those signals.

Conditions that affect blood flow and circulation, such as diabetes and very low blood pressure, also make people susceptible. Feces and urine break down skin tissue, so bedsores are often a problem for people who cannot control their bowels or bladders.

So what works to prevent bedsores? A recent study that analyzed results from 59 different studies revealed some clues. It turns out that mattresses with special “dynamic” surfaces that mechanically change the pressure under the patient may not be worth their extra expense (some cost as much as $30,000 per bed). Compared to so-called static support (mattresses with extra padded or special honeycombed surfaces), the dynamic mattresses came out on top in only three of 14 studies.

The study also looked at other factors, including repositioning (moving an immobilized patient), skin care, and nutrition. And while the combined findings were informative, some questions remain unanswered. For example, the jury is still out on which nutrients, if any, might speed the healing of bedsores. However, malnutrition is common among older people, with or without bedsores, so people at risk for bedsores should make sure they’re eating properly. Experts also offer other suggestions (see sidebar) for what families and loved ones can do to help prevent bedsores.

It’s not pleasant to think about bedsores. Still, a little thought can head off problems that are even less pleasant.