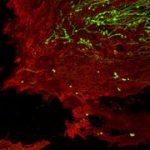 Damaged nerve cells in a finger will regrow, but those in the spinal cord do not. Why the difference? Scientists at the Max Planck Institute for Neurobiology working with an international team of researchers can now explain two important details. Nerve cells in the spinal cord still have the ability to grow even many weeks after an injury. However, the regeneration is prevented by scar tissue created after the injury occurs. Now that they have this knowledge, scientists can search for ways to reduce the scar tissue and activate the relevant growth mechanisms. (Current Biology, June 2009)

A small cut in a finger hurts, but it is not particularly serious. Within a few days, the wound will have healed and the body will have repaired the damaged skin cells, muscle fibres, blood vessels and the severed nerve cells. But why do these amazing powers of self-healing fail when the damage is to the central nervous system (CNS), that is the brain or the spinal cord?

How well a damaged nerve cell heals depends on where it is in the body: While nerve cells in the central nervous system hardly ever recover from injury, nerves outside of the CNS, that is those in the peripheral nervous system, usually regenerate after a short time. Scientists have been trying for years to explain this difference. This knowledge could create a foundation on which to develop new methods for treating spinal cord injuries. It has now become clear that there are a whole number of substances in the central nervous system which prevent the nerve cells regrowing. These substances do not occur in the peripheral nervous system, so there is nothing to stop regeneration there.

Over the last 20 years, scientists have also assumed that it would only be possible for nerve cells to regrow after injury to the central nervous system if the cells were previously stimulated by a peripheral injury. However, it remained unclear whether this brake on growth originated in the cells themselves or with a substance in their environment. What is known is that injury to a cell in the peripheral area activates genes which are linked to cell growth. These genes are not activated when there is scission in the central area. “Following a peripheral injury, the cell takes up a ‘start position’ and can start to grow straightaway if injury to the central nervous system occurs,” explains Frank Bradke who, together with his team of junior scientists at the Max Planck Institute for Neurobiology in Martinsried, is investigating why there are these different abilities to grow. Together with an international team the Max Planck researchers have now shown that nerve cells in the central nervous system still have the ability to regenerate many weeks after an injury occurs. In a simple, but very effective experiment, the scientists took a nerve cell which had already been damaged in the CNS area. They cut the cell in the peripheral area as well, therby activating the growth gene. When the cell was damaged again in the CNS area, it grew again – irrespective of how many weeks had elapsed between the first and second CNS injury.

So if nerve cells can grow even some time after the spinal cord has sustained damage, why do they not do so when they are stimulated with a peripheral cut? Is it perhaps due to the scar tissue which forms five days after an injury to the spinal cord? To investigate this, the scientists demonstrated particular dexterity and sensitivity: Normally, even a very small injury severs hundreds of nerve cells. Using a two-photon laser, the neurobiologists were able to sever the extension of a single nerve cell. No scar tissue formed on this tiny injury and the nerve cells did indeed regenerate after a few days.

“Even if we can’t move straight to developing new therapies from this point, these results provide an important basis for subsequent studies,” says Bradke. “First of all it is now clear that damaged nerve cells can still regenerate after a long period of time, if they are stimulated in the correct way. Secondly, we also know that activating the growth genes is not sufficient on its own to make nerve cells in the central nervous system grow again. For successful regeneration, we have to prevent the formation of scar tissue or at least reduce it.” With this knowledge, we can now develop methods which reinforce the positive effects of the genes and cause less scar tissue to form.

How to Start Support or Discussion Group