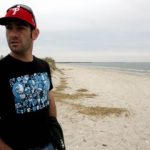 CAPE MAY – Shore towns do not like bad publicity, but this year, the city will spend $10,000 from its beach revenue to print a quarter-million brochures explaining to tourists that they could break their neck or back swimming or body surfing.

The city is taking the step due largely to the persistence of Chad de Satnick, a local lifeguard who broke his neck surfing in hurricane-driven surf in September 2001 off the city’s beaches.

De Satnick, 33, had to undergo spinal surgery and years of therapy following that injury, but he was able to regain full use of his limbs, although he lost a little of his flexibility.

Since then, he has become concerned about the rising number of spinal injuries at the city’s beaches, which he attributes to a 1990 Army Corps of Engineers project that changed the way the waves break on shore. It took years of involvement, but he now has the city’s attention.

“We’re the first South Jersey beach resort to issue a beach-safety pamphlet. We did listen to him, and we’re working on the problem,” Mayor Ed Mahaney said.

The day de Satnick was injured, the surf was up thanks to Hurricane Humberto. He grabbed his surfboard and headed to Poverty Beach in Cape May.

De Satnick, then 24, had just graduated from college and married his wife, Stefani. He worked at a window-treatment business owned by his father, Dennis. He had been surfing since he was 7.

He had no reason to believe a life-changing event that would crush two cervical vertebrae in his neck, make his arms go numb and send him through years of physical therapy was coming in with the hurricane swell.

“Humberto produced big waves. It was the third wave I caught that morning. I caught the wave 50 yards off the beach and rode it down the line, staying off the white water. I was riding a wave with a 7-foot face,” de Satnick said.

The wave brought him close to the beach and to his friend Aaron Rothwell, who was standing in what should have been deep water, but wasn’t.

“I see Aaron is standing in no water, and I have to make a decision,” de Satnick said.

De Satnick bailed. With the beach to his right, he dived back to the left, into the wave. He did not dive through it. The wave took de Satnick with it to its final destination. It crashed him head-first into about 3 inches of water. The weight of the water and his own 210-pound frame forced his head into the sand.

“I had no chance to brace myself with my arms,” he said.

De Satnick, feeling disoriented and numb, drove himself to the hospital.

The neurosurgeon told him he may not walk again prior to an 11-hour surgery in which bones from his hip, along with titanium rods and plates, were used to fuse three of his vertebrae together. Years of therapy followed.

Six months after the surgery, de Satnick saw an advertisement for a golf tournament for people with spinal-cord injuries. In 2004, he played such a tournament in Malibu, Calif., with his friend Steve Coon.

“We had a blast. It was a great group of active, positive people,” de Satnick said.

De Satnick became an events coordinator in the Northeast for the group that sponsored the tournament, Life Rolls On, a division of the Christopher & Dana Reeve Foundation. In September, Life Rolls On will host its fifth annual golf tournament at Cape May National Golf Club in Erma, Lower Township, to raise money for spinal-cord injury awareness and for children who have suffered such injuries. It also hosts a skiing event in New York and a surfing event every summer called They Will Surf Again, set for June 19 in Wildwood Crest.

The event will feature 120 volunteers helping 40 people with spinal-cord injuries ride the waves. Some have never surfed before. Participants’ impairment ranges from quadriplegics to those with lesser injuries. De Satnick, however, said there is no such thing as a minor spinal-cord injury.

In de Satnick’s youth, Cape May was known for its gently sloping beaches. The city had bragged about them since Victorian times. Waves broke far offshore and rolled in. An amateur could catch a wave in those days, he said.

That changed in 1990, when the city underwent its first U.S. Army Corps of Engineers beach replenishment project. The sand pumped in from offshore had larger grains that did not knit with the fine sand along the beach. Currents eroded cliffs in the new sand. Waves break when they reach shallow water. The cliffs meant that shallow water was right near the beach, so that’s where the waves broke.

When de Satnick and his father were lifeguards, they would see one or two spinal-cord injuries every summer. The numbers suddenly began rising, from six to 10 per year during the 1990s and as many as 11 in 2007, 22 in 2008 and 32 in 2009, Cape May Fire Department statistics show.

The city responds nowadays to spinal-injury calls with the utmost care, including use of neck collars and the immobilization of victims. Fire Chief Jerry Inderwies said one reason there are so many spinal injuries these days could be because they are all being reported. He also said that, due to patient confidentiality laws, the city does not know how many of the injuries are serious. There is no follow-up information after the patient goes to the hospital, he said.

Working with the city

When de Satnick approached City Council about the problem in February 2008, city officials said they already knew about it.

“There was acknowledgement from City Council, but not a lot of motivation,” de Satnick said. “My approach to City Council was to not be confrontational or point fingers and cast blame.”

De Satnick – who continued to come to council meetings – convinced city officials they had a real problem. He was the rarity, a local surfer who got hurt, but most of the injuries had been to vacationers who have little expertise in ocean bathing. He convinced officials of the need for a public awareness campaign.

The city’s insurance carrier also ruled in 2008 that the city would be less liable if bathers were warned of the risks. And de Satnick got the city’s Beach Patrol and Fire Department on his side, leading to a program in which firefighters and lifeguards join de Satnick in speaking to school children about beach safety, a program that will expand to schools outside Cape May this year.

De Satnick’s goal, one that could come with the city’s next beach-replenishment project this fall or in 2011, is to engineer a safer beach.

“We’re cooperating with the Army Corps and our congressional delegation to seek a new engineering process to hopefully reduce, and ultimately eliminate, these head, back and neck injuries,” Mahaney said.

De Satnick has not been confrontational, but he has been antsy about results. He is critical of how long it took the city to embrace the campaign but commends it for the brochures.

“The last two years, they have been very helpful. I have a real good feeling about the brochures. I think it’s really going to make a difference in 2010,” he said.

De Satnick said he supports beach replenishment. He knows it is needed to protect property, but he does not want the city to wait for the next project to change the beach profile. He said machinery has been used successfully in Florida to change a beach’s profile and it should be tried now. He does not like to hear the word no.

“A neurosurgeon told me I wouldn’t walk again or surf again, and I’m doing both of them,” de Satnick said.

* 33
* Cape May native, lives in Lower Township with his wife, Stefani
* Grew up surfing in Cape May and worked as a lifeguard with the Cape May Beach Patrol
* Broke his neck in 2001 in a surfing accident at Poverty Beach in Cape May
* Organizes events for Life Rolls On, a group that raises money for people with spinal-cord injuries and allows those with such injuries to golf, surf and ski
* Convinced Cape May to put up signs on the beach and print brochures to explain beach safety to the public
* Is fighting for engineering changes to create safer beaches, such as a gentler slope to the sand

They Will Surf Again, a free event that invites young people with spinal-cord injuries to ride the waves, is set for 9 a.m. June 19 on the beach in Wildwood Crest. Sponsors provide wetsuits, adaptive surfboards and expert instruction. Participants bring swimsuits, towels and sunscreen.