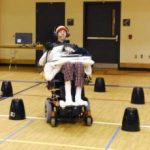 An assistive technology that enables individuals to maneuver a powered wheelchair or control a mouse cursor using simple tongue movements can be operated by individuals with high-level spinal cord injuries, according to the results of a recently completed clinical trial.

“This clinical trial has validated that the Tongue Drive system is intuitive and quite simple for individuals with high-level spinal cord injuries to use,” said Maysam Ghovanloo, an assistant professor in the School of Electrical and Computer Engineering at the Georgia Institute of Technology. “Trial participants were able to easily remember and correctly issue tongue commands to play computer games and drive a powered wheelchair around an obstacle course with very little prior training.”

At the annual conference of the Rehabilitation Engineering and Assistive Technology Society of North America (RESNA) on June 26, the researchers reported the results of the first five clinical trial subjects to use the Tongue Drive system. The trial was conducted at the Shepherd Center, an Atlanta-based catastrophic care hospital, and funded by the National Science Foundation and the Christopher and Dana Reeve Foundation.

The clinical trial tested the ability of these individuals with tetraplegia, as a result of high-level spinal cord injuries (cervical vertebrae C3-C5), to perform tasks related to computer access and wheelchair navigation — using only their tongue movements.

At the beginning of each trial, Ghovanloo and graduate students Xueliang Huo and Chih-wen Cheng attached a small magnet — the size of a grain of rice — to the participant’s tongue with tissue adhesive. Movement of this magnetic tracer was detected by an array of magnetic field sensors mounted on wireless headphones worn by the subject. The sensor output signals were wirelessly transmitted to a portable computer, which was carried on the wheelchair.

The signals were processed to determine the relative motion of the magnet with respect to the array of sensors in real-time. This information was then used to control the movements of the cursor on a computer screen or to substitute for the joystick function in a powered wheelchair. Details on use of the Tongue Drive for wheeled mobility were published in the June 2009 issue of the journal IEEE Transactions on Biomedical Engineering.

Ghovanloo chose the tongue to operate the system because unlike hands and feet, which are controlled by the brain through the spinal cord, the tongue is directly connected to the brain by a cranial nerve that generally escapes damage in severe spinal cord injuries or neuromuscular diseases.

Before using the Tongue Drive system, the subjects trained the computer to understand how they would like to move their tongues to indicate different commands. A unique set of specific tongue movements was tailored for each individual based on the user’s abilities, oral anatomy and personal preferences. For the first computer test, the user issued commands to move the computer mouse left and right. Using these commands, each subject played a computer game that required moving a paddle horizontally to prevent a ball from hitting the bottom of the screen.

After adding two more commands to their repertoire — up and down — the subjects were asked to move the mouse cursor through an on-screen maze as quickly and accurately as possible.

Then the researchers added two more commands — single and double mouse clicks — to provide the subject with complete mouse functionality. When a randomly selected symbol representing one of the six commands appeared on the computer screen, the subject was instructed to issue that command within a specified time period. Each subject completed 40 trials for each time period.

After the computer sessions, the subjects were ready for the wheelchair driving exercise. Using forward, backward, right, left and stop/neutral tongue commands, the subjects maneuvered a powered wheelchair through an obstacle course.

The obstacle course contained 10 turns and was longer than a professional basketball court. Throughout the course, the users had to perform navigation tasks such as making a U-turn, backing up and fine-tuning the direction of the wheelchair in a limited space. Subjects were asked to navigate through the course as fast as they could, while avoiding collisions.

Each subject operated the powered wheelchair using two different control strategies: discrete mode, which was designed for novice users, and continuous mode for more experienced users. In discrete mode, if the user issued the command to move forward and then wanted to turn right, the user would have to stop the wheelchair before issuing the command to turn right. The stop command was selected automatically when the tongue returned to its resting position, bringing the wheelchair to a standstill.

“Discrete mode is a safety feature particularly for novice users, but it reduces the agility of the wheelchair movement,” explained Ghovanloo. “In continuous mode, however, the user is allowed to steer the powered wheelchair to the left or right as it is moving forward and backward, thus making it possible to follow a curve.”

While this initial performance trial only required six tongue commands, the Tongue Drive system can potentially capture a large number of tongue movements, each of which can represent a different user command. The ability to train the system with as many commands as an individual can comfortably remember and having all of the commands available to the user at the same time are significant advantages over the common sip-n-puff device that acts as a simple switch controlled by sucking or blowing through a straw.

Some sip-n-puff users also consider the straw to be a symbol of their disability. Since Tongue Drive users simply wear headphones that are commonly worn to listen to music, the system is more acceptable to potential users.

John Anschutz, manager of the assistive technology program at the Shepherd Center, identified advantages the Tongue Drive system has over the tongue-touch keypad.

“The Tongue Drive system seems to be much more supportable if there were a failure of some component within the system. With the old tongue-touch keypad, if the system went down then the user lost all of the functions of the wheelchair, phone, computer and environmental control,” explained Anschutz. “Ghovanloo’s approach should be much more repairable should a fault arise, which is critical for systems for which so much function is depended upon.”

A future system upgrade will be to move the sensors inside the user’s mouth, according to Ghovanloo. This will be an important step for users who are very impaired and cannot reposition the system for best results, according to Anschutz.

“All of the subjects successfully completed the computer and powered wheelchair navigation tasks with their tongues without difficulty, which demonstrates that the Tongue Drive system can potentially provide individuals unable to move their arms and hands with effective control over a wide variety of devices they use in their daily lives,” said Ghovanloo.

Adapted from materials provided by Georgia Institute of Technology, via EurekAlert!, a service of AAAS.

Injured archer not forgotten at tournament