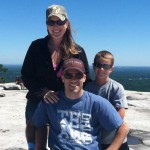 “I remember hitting the bottom, being face down, and my entire body getting a tingling feeling like when your foot falls asleep. It was then that I knew I broke my neck. I couldn’t move, not even to lift my head up.

About a minute went by and that’s when I prayed, ‘God, if you want me, take me. If not, please don’t let me die.’ With that, the rest of my air went out, and I blacked out.” ~Jason Dugmore

Each year in the United States, approximately 12,000 people become paralyzed due to spinal cord injuries. Most are Caucasian males between the ages of 16 and 30. Spinal cord injuries are caused most often by vehicle crashes and falls, followed by violence and sports-related accidents. (NSCIS, 2012) The odds of recovery, marriage, and ability to find work become diminished. The costs of healthcare rise to an estimated $1.8 million during the course of young adulthood. (Foundation for Spinal Cord Injury Prevention, Care & Cure)

At age 15, Captain of the Deerfield Beach High School Swim Team, Jason Dugmore dove off the guardrail at the end of the Boynton Beach jetty into two shallow feet of water. That hot summer day, Jason had gone out to surf with his buddies, but the waves weren’t there. The guys decided to swim instead. In the 30 seconds it took to strip off his shirt and dive in, his life was changed. Jason had no idea the water was so shallow.

Fifty yards out off the beach, Jason remained without air for anywhere between 15 to 30 minutes. His friends brought him to shore, performing CPR along the way. After being resuscitated by other onlookers, he was taken to Bethesda Memorial Hospital in Boynton Beach. His family learned he had broken vertebrae 4, 5, and 6. A piece of the 5th had lodged into Jason’s spinal cord, causing paralysis. The doctors said that their patient would be lucky to brush his teeth, or be able to feed himself.

It was then that Jason’s parents knew that he needed to be transferred to Jackson Memorial Hospital in Miami. Many people heard the news, sending a wall full of cards, telling of their prayers for him. A few weeks went by before he was stable enough for surgery. It was after that surgery that Jason began to make progress. Each feat was a miracle. Jason lifted his hands. Jason fed himself.

Gradually, Jason Dugmore has regained his health. Though technically a quadriplegic, he has some paralysis in all four limbs, but he is not completely paralyzed.

After one month in intensive care, Jason had five months of inhospitable rehabilitation. Afterward, he attended physical and occupational therapy three days a week for two years. Jason also went away to college and learned to manage his own independence.

Today, 24 years later, he is still seeing ongoing healing in his body.

Within the last few years, he has taken up hand cycling as a sport, becoming the volunteer Director of the Treasure Coast chapter of Achilles International. The exercise has improved his ability to sweat, something his body hadn’t done in the past 24 years. “It’s important to remain active,” Jason adds.

The young man, now 39, leads a full life. He and his wife, Laura have a son, even though doctors gave him only a 10 percent chance of having children. He has been white water rafting, horseback riding, snow skiing, scuba diving, and once owned a three-wheel motorcycle.

He now works part-time as the Student Accounts Manager for Morningside Academy and Little Friends Preschool at Morningside Church in Port St. Lucie, Florida. He also occasionally gets to share his story with students when filling in as a substitute teacher. He has coached his son’s baseball team and learned that life does indeed go on.

Jason Dugmore states, “I learned in the first couple of months after the diving accident that there is always someone worse off than me. I had a choice; I could either go back to my room and lay in bed all day watching television, or I could make the most of my life. I made a conscious choice to live life.”

Jason Dugmore is a hometown hero because he has set an extraordinary example as an overcomer in both body and soul within his family, church, and community.

This opinion article was written by an independent writer. The opinions and views expressed herein are those of the author and are not necessarily intended to reflect those of DigitalJournal.com

Veterans offer their thanks