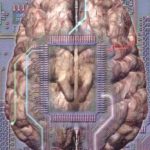 Paralysed patients will one day be able to move their bodies using a robotic device controlled by a chip that has been implanted in their brain.

Scientists are developing tiny chips that will be able to read a patient’s thoughts and transmit the information wirelessly to prosthetic limbs.

The chip, measuring little more than a centimetre wide, would decode patients’ thoughts by analysing the activity of neurons in the brain when they think of a specific movement.

Electrodes on the chip would pick up the impulses while basic data processing technology would decipher the signals and and wireless transmitter would send the information from the brain.

Professor Rodrigo Quian Quiroga said that even though a patient with a spinal cord injury may lose the ability to move his arm there may be nothing wrong with his brain.

‘The guy can see the object he wants to reach, the guy can have the intention to reach to the object, the brain can send a command to the arm – “Reach for this cup of tea” – but the signal gets broken at the level of the spinal cord,’ he told The Engineer magazine.

‘If we can get the signals from these neurons and interpret them with what is called decoding algorithms, then we can move a robot device placed on the paralysed arm.’

Professor Quiroga’s team at Leicester University are now trying to develop a usable chip packed with electrodes and data processing technology as well as a wireless transmitter for relaying the signals.

Similar technology has already been tested using chips that are implanted in the brains of monkeys. But these tests have been carried out using a cable that trails from the monkey’s skull from a hole drilled in the animal’s head.

This would be of no use to human patients.

Quiroga said he believes the brain chip could be used on patients with spinal cord injuries within five years.

Experiments have also been carried out in the US that use electrodes implanted in patients’ brains that monitor brain activity so that a robotic hand or a cursor on a computer screen can be operated.

And patients with severe epileptic seizures or Parkinsons can be treated by surgeons using a ‘brain pacemaker’ which stimulates the brain or blocks disruptive signals.