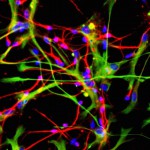 Any damage to the nervous system can be permanent and devastating. One of the issues is that neurons aren’t really that great at regenerating. The axons and dendrites that actually conducts the majority of the signal are only thin protrusions from the main neuron cell body. In many cases, these neurons link with each other in very complex patterns. It could be argued that efforts to repair spinal cord injuries are almost simple in comparison to other nervous system damage.

Spinal cord injuries are often just a break in the relatively straight connection of the spinal cord. The connections between the spinal cord and the rest of the body, or the intricate patterns in the brain, are much more complex. But repairing that kind of damage isn’t hopeless either, especially thanks to recent work done at the University of Oxford.(via EurekaAlert)

They were successfully able to create three-dimensional neural structures in culture. We’ve cultured neurons on flat surfaces for a long time, even using this as part of testing for certain drugs. 3-D structures hold much more potential, including the possibility of implanting them as part of treatments.

Many other groups are already able to create neurons. They can take a normal human cell and turn it into an induced pluripotent stem cell, and then into a neuron. While other groups have had some success directly converting certain cell types into neurons. Either way, the important factor is that a patient would have a source of neurons from their own body, greatly reducing any immune rejection problems.

The Oxford group was able to create these structures by implanting neurons in a hydrogel that was laced with tiny nanofibers. These nanofibers were then coated in a cell adhesion protein called laminin. The protein not only boosted overall growth of the axons and dendrites, but made their growth follow the path of the nanofibers directly. Using this they could create 3-D neural circuits.

There’s still plenty of work to be done, one of the next steps will be enhancing the complexity of patterns that they can implant in the gel. But all of the materials used are both biocompatible and biodegradable, meaning they could be implanted. If this was used to treat humans, some rehabilitation would be necessary, but could effectively repair many kinds of nerve damage. Complex neural circuitry could also be made outside the body and used to study various human neurological conditions.