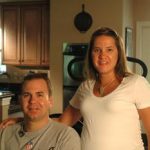 The first patient to undergo an adult stem cell procedure that may help spinal cord injury patients regain function had an injection Thursday that may change the course of medical history.

Sitting in his den Thursday morning, surrounded by pictures of Dr. John, Matt Cole, the patient, was cool, calm and collected. His wife Kim was with him, and he answered questions for documentation of the medical procedure he was about to undertake – an injection of his stem cells into his spinal cord that may help him regain use of his lower body.

Cole, 30, was injured in Iraq during his second tour of duty. A corporal in the U. S. Marine Corps, his day of infamy was May 17, 2005. Insurgents attacked with mortars and rockets and he was hit with shrapnel in the back and right lung. As a result, he suffered a spinal cord injury and a collapsed lung. His was treated on the site by corpsman and then flown to a MASH unit. There he was put under, stabilized and sent to a hospital in Germ-any. “I was supposed to die,” Cole said.

Four days later he was flown from Germany to the Bethesda Naval Hospital in Maryland and later he went to the Veterans Administration Hospital in Tampa for rehab and physical therapy.

He learned how to get off the floor, how open and close doors and how to get from the bed to the wheelchair, among other tasks.

Through it all, his mother Diane said, “He kept in good spirits and has never been anything other than positive.”

He said, “Kim was the first one to the hospital and has stayed by me ever since.” They were dating at the time and are now married, expecting their first child. Kim is an adaptive physical education teacher for St. Tammany Parish.

Conscientious about his physical therapy, Cole has continued exercising and keeping himself fit, hoping that one day he would be able to find a medical solution that would help him get out of the wheelchair.

“Keeping a positive attitude is key, along with a strong faith in God and staying in shape. You can really fall into a hole, so it’s important to remain positive and keep up with what’s out there in research, anything that can improve your quality of life,” said Cole.

His doctors in Tampa told him there was a lot of research being done through stem cell therapy and that eventually it will done in the U.S. The best time to try to stimulate the peripheral nerves surrounding the injury that would help regain function is when the injury is fresh. As time went on, his doctors knew he was not going to regain function and eventually gave him an 8 percent chance of standing alone on his own.

At one point, he and his wife Kim considered going to Portugal, where they were conducting stem cell spinal cord research.

However, he didn’t have to. “It was in my own backyard,” said Cole. “My mother-in-law, Barbara Eckert, found out about the research here in Covington from her paper, the St. Tammany News.”

The doctors have many adult stem cell protocols in various phases, all approved by the FDA, treating many types of cardiovascular problems, ALS or Lou Gehrig’s disease and were applying for approval of spinal cord injury treatments.

Cole is their first case.

“When I met him (Lasala), he seemed impressed with me-young healthy, keeping up with physical therapy. After a CT scan of my spinal cord, he said I was a good candidate and was accepeted into the program. The doctors at the VA in Tampa were ecstatic, very excited and wanted to talk to Lasala. They were excited that one of their patients was chosen to be the first.”

Months ago, MCS or Mesenchymal stem cells were removed from Cole’s bone marrow in his hip. He said that since he had no feeling, he did not experience a lot of discomfort. He slept through the procedure and had no ill effects, or soreness, after.

The MSC stem cells are used because they can differentiate into a variety of cells types and can regenerate damaged tissues such as bone, muscle, heart muscle and tendons. The MSC cells were placed in a incubator and expanded.

Between 50-80 million cells were needed for this neurological procedure. In other procedures, the cells are mixed with endothelial progenitor cells that circulate in the bloodstream. Since this was not a heart procedure and the bloodstream was not used, these cells were not added for Cole’s procedure.

Once the cells expanded, they are checked before injection. In this case, the cells were never kept in the cryo-preservation freezer, but came from the incubator to Cole directly. “The cells dictate when it’s time for the procedure,” said Jacquie Bonano, spokesperson for Lasala’s group. The group founded the Stem Cell Foundation, established to promote adult stem cell research and therapies and help with medical costs.

Thursday, Cole had the MCS cells injected into his spinal cord. After spending the night in hospital, he was released Friday morning.

The cells used are called autologous cells because they are from the patient. TCA’s research only uses the patient’s own cells and no one else’s cells are ever injected into a patient.

Cole said, “I am reassured that the procedure is backed by the government and the FDA. It’s good to have the regulations to help the patients.”

Cole said he was optimistic about the procedure and would naturally want to walk again, but even so, “I hope what they can learn from me can help everyone and may be available for insurance coverage and the VA to use.”

It will be a while before any measurable results will be realized. Meanwhile, Cole will go back to his regular routine. After speaking to his doctors in Tampa and consulting with Lasala, he has decided to enter into a rigorous physical therapy routine, including swimming.

“Everyone that lives in a chair wants to get out of it. I want to be the one that proves the doctors wrong. I’m grateful that Dr. Lasala would consider me, since I’m five years since my injury. For not being from the United States, he is very patriotic and was excited to have a veteran as a patient. He wants to be in Covington and create a center of medicine here. He loves St. Tammany and Louisiana and doesn’t want to be anywhere else.”

In the hospital room, Kim said, “It’s such a simple procedure for a miracle.”