Everett talks about his recovery from paralysis 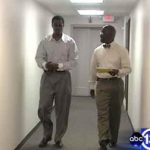 HOUSTON (KTRK) — Three years ago, a hit on the football field left Kevin Everett paralyzed. He became one of the 300,000 Americans living with spinal cord injuries.

Everett has recovered from his injury, and he credits his faith, rehab and something rarely done for spinal cord injury: cooling.

In 2007, Everett’s promising career with the Buffalo Bills came to an end with one hit.

“I remember making the hit, hitting the ground and having these thoughts in my head, ‘Wow, am I really paralyzed or is it a stinger?'” Everett said.

That’s what really scared him. And it was true.

But Everett is no longer paralyzed; he attributes his recovery to his faith, rehabilitation at The Institute for Rehabilitation and Research (TIRR) and cooling.

Doctors were hoping it would help him recover from the spinal cord injury.

Then he was flown to Houston, where the Port Arthur native spent months at TIRR. The rehab helped him regain the use of his arms and legs. He has a new life, and he’s a professional speaker, especially to doctors interested in his recovery.

“It’s just mind blowing that these doctors ask me these questions about it,” Everett said.

“Part of that was the type of injury he had and the good rehabilitation he got, but what we need is for all spinal cord injury patients to be able to walk just like Kevin did,” Dr. Dong said.

Although it’s not the football career that he had hoped for, Everett doesn’t look back.

“I had a good career; I had fun,” he said. “I had fun playing the sport. I wish I could have played longer, but I still have love for the game.”

And his new role is a voice for others who also have spinal cord injuries.

Dr. Kim says they are two to three years away from taking a patient’s own stem cells and using them to heal spinal cord injuries here in Houston. That’s considered much safer than the studies where patients receive embryonic stem cells, which may cause cancer.

From his toes, a message of hope