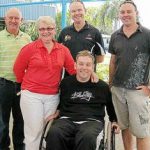 IT is Spinal Injuries Awareness Week. For Mackay’s Luke Simmons and his family, sending out the message of how a spinal cord injury can change a life forever is deeply personal.

Luke and his brother Scott were born five years and two months apart. They grew up camping, building bonfires and working as pastry chefs in their parents’ bakery.

Coincidentally, both their lives took a dramatic turn when they each reached the age of 23 and sustained spinal cord injuries – Scott, after a motorbike accident in 1998, and Luke, after falling into a pool at a party in 2003.

Scott’s accident left him with incomplete paraplegia. He eventually managed to walk again and now works as supervisor of an earthmoving company in Gladstone, where he is raising a young family.

Luke’s story, however, was different. His injury – quadriplegia – was far worse than his brother’s.

Their mother Marian recalls the day Scott called to tell them Luke – their youngest son – was paralysed.

Marian and Max moved to Brisbane and lived in a caravan park for 12 months while Luke recovered, spending $30,000 on equipment so Luke could live with them after leaving the Spinal Injuries Unit.

They moved to Gladstone so Luke could be closer to support services such as hydrotherapy. Eventually, Luke moved to Mackay to Paravilla, which helped him live independently.

Now in his own unit, Luke requires some assistance from personal support workers, but enjoys driving, fishing, swimming, cooking and spending time with his nieces and nephews.

Marian describes her sons as strong and compassionate men who have worked hard towards their goals.

“It’s difficult to see that every day is a bit of a struggle for them,” she said. “But the biggest thing is, we’ve still got our children. You take it one day at a time. You set goals and then go towards them.”

“As shown by Luke and Scott and their parents (a spinal cord injury) doesn’t mean you have to give up. You can still achieve your goals and lead a fulfilling, enjoyable life,” he said.