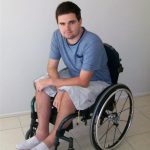 Meet Martin Hume. Almost three years ago the 21-year-old from Elanora on the Gold Coast suffered major spinal injuries after a wakeboarding accident only two days after finishing year 12.

Martin Hume is a volunteer speaker for the association, visiting schools and talking to students in the hope his story can make a difference.

Martin sustained his injury in a wakeboarding accident only two days after he graduated from year 12, leaving him with quadriplegia.

Since that day in 2007 Martin’s life has changed dramatically.

“I spent 11 months in rehabilitation and then came home in October 2008. Since then I’ve gone back to university and things are different now, it’s not as easy as it used to be, getting out of bed – it takes a lot longer and getting ready for things – there’s a lot more planning involved, you just can’t jump in the car and go somewhere.

“It is a learning process but I suppose I’ve learnt really well and you’ve got to either learn or you won’t get anywhere,” he says.

Martin got involved with the Spinal Injury Association shortly after he left hospital.

“I’d spoken to a few people in hospital about what they do and about the SEAT (Spinal Education Awareness Team) program. I felt that I needed more time off before going back to university and I thought that during that year it would be a good year to do it, to get me out of the house, to keep me busy, to get involved with the SEAT team and help educate other kids about what spinal cord injury is and how it effects your life.”

He says his motivation for doing the talks is to bring more awareness to people with disabilities.

“I want people to become more aware that not everybody in a wheelchair is mentally incapable and that we are real people, we just can’t walk, and I think that trying to drum that into young kids now from a young age is good because further down the track when they become adults and the leaders of the world they will see that people with a disability are actually real people and are not all mentally disabled as well as physically disabled.”

He says that not all spinal cord injurious are caused by reckless behaviour and his message to the students at the schools he visits is that they need to find a balance between ‘not acting stupidly’ but also not wrapping themselves in cotton wool either.

“It’s a matter of taking measured risks and not allowing yourself to get into stupid situations. So if you’ve been drinking, don’t risk activities such as swimming or surfing, and always walk into the water, never jump into the water.”

He says many spinal injuries are a result of water-related incidents such as people diving into shallow water, jumping onto rocks, or tripping over things in the water shallows.

“I think that the program can help prevent injuries, even if it’s just one person, it’s one less person that has to go through what I went through.”

Martin says his young age really helps him to connect with the students and helps them to see themselves in his shoes and realise that it really could happen to them.

“A lot of the older kids relate really well to me because I’m only 21. They see a lot of old people come in in wheelchairs and they’re like ‘oh, that’s another old guy in a wheelchair, it’ll never happen to me.’

“But to see a young person that it’s happened to, I think it’s really important because they relate really well, they relate much better to younger people.

“I know as a youth if I saw a 40-year-old guy in a chair turn up saying ‘I’ve been in a wheelchair since I was 18’ it doesn’t have the same impact as if a 21-year-old turns up and says ‘I had my accident two days after I finished year 12 – so it can happen to you – it’s reality’.”