How wheelchair skills can give you independence 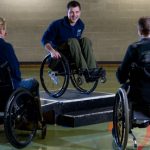 Life in a wheelchair isn’t as limiting as you’d expect, once you’ve learned the moves

The first time I got into a wheelchair I felt euphoric. After a month spent in bed, reflecting on all the things I would never do again – no more climbing or playing football – it was a joy just to be able to move again. Four weeks earlier my physically active lifestyle had come to a sudden stop when I fell from a tree, resulting in a spinal-cord injury which left me facing life with paraplegia.

Yet, on my second day in the chair, I felt crushed again; as though I had just learnt to ride a bike only to be told that I had to stay on the bike for the rest of my life. The restrictions of four wheels quickly became evident. I couldn’t move while holding anything, and it felt like everywhere I looked I saw stairs. The wheelchair suddenly represented everything I had lost.

Then one afternoon I went along to a wheelchair-skills session at Stoke Mandeville hospital, organised by a charity called The Back Up Trust. Trainer David Ball had been injured for 15 years and was preparing for a fundraising push up Helvellyn, a 950–metre peak in the Lake District. He was relaxed and assured – but most inspiring was how he seemed at one with his wheelchair. As well as learning practical skills, the session helped me to start rebuilding my ambitions. I would even get back to the great outdoors. The logistics might be challenging, but it was possible.

Five years later, I am one of 28 Back Up wheelchair-skills instructors, striving to offer the same confidence boost to others. We take the programme to all 13 spinal units in the UK. The outcome of spinal-cord injuries can vary dramatically and we have to tailor our approach to patients from six to 96 years old, with paralysis starting anywhere from the ankles up.

Naturally we cover the basics: pushing forwards, backwards and turning. But there are also more complex moves – pushing with one hand, negotiating ramps and kerbs, going down and even up stairs. Some skills, such as stair-climbing are only going to be possible for a few people (the technique requires the wheelchair user to go up backwards pulling on one wheel and a handrail) but we hope to inspire participants to rethink what the future might hold, at a time when many people can’t see beyond what they can’t do. Luckily for me, I was active before my accident so my arms regained their strength fairly easily after a month’s bedrest, but it’s more difficult for those who had a sedentary life before, as it takes time to build up the muscles, especially in the backs of the arms, that you need to manoeuvre easily in a wheelchair.

It is estimated that 20% of people with spinal-cord injury undergo rehabilitation in general hospitals, and this number seems to be increasing. This means many people don’t get access to specialist spinal rehabilitation or peer support. Back Up frequently sends trainers into general hospitals to offer additional support. And for some, a three-hour session with us is the only wheelchair-skills-training experience they have. For those who miss out on even this, there can be profound implications for the rest of their lives, ones that may prevent them from realising their full potential.

One previous student, Ann Lewis, told me: “Before I did the training, I was fed up with not being able to get up a two-inch kerb. The training gave me the confidence to go out without feeling like I had to plan everything. I’m now at University in Edinburgh doing a master’s degree in outdoor education. I would never have had the confidence to do this on my own.”

The youngest person I have taught is Kitty, who is eight years old. She contracted transverse myelitis (a condition that affects the spinal cord) a year ago. Kitty’s father, Stewart Castledine, says the programme is really important to her: “After such a hard year, she responds really well to anything that’s fun. She’s always been very active and competitive. When we go to basketball practice, she always wants to race (and she beats me). And because the [Back Up] instructors are all wheelchair users themselves, Kitty is less inhibited about asking questions. There is a chance that Kitty’s condition could improve, but in the meantime it’s important to make the most of today.”

Numerous studies have shown the value of an active life to the long-term physical health of wheelchair users, but there are also important psychological implications to the role of confidence building. Developing independence is surely the first step towards rejoining wider society, and going back to work.

I have learned a lot in my six years using a wheelchair. If I knew back at the start what would become second nature in time, I would have felt a lot less anxious.