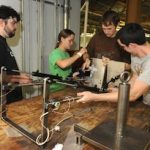 Like probably every other person with a severe spinal cord injury, Sloan Deumite wants to walk again. Ten LSU engineering students have spent much of their senior year trying to make that happen.

On Thursday, the students will present the first stage of a project called “Walk Again.”

The goal is to eventually produce a mechanical exoskeleton that could allow quadriplegics to walk on their own.

“Yeah, it’s fun to work on stuff like this, but it’s a lot more fun to help somebody,” Conzelmann said.

Deumite, 42, broke his neck in a boating accident in 1986 in his senior year of high school. He lost the use of his legs and said he has some use of his left arm, and though he uses a wheelchair “95 percent of the time,” he is able to travel short distances in a walker.

About two years ago, he was watching television with his father, Norman, and saw a show on the Military Channel that featured exoskeletons that are used to permit soldiers to carry heavier loads than they could otherwise. Exoskeletons exist for paraplegics, but balance is an issue for quadriplegics.

The development of self-balancing devices like Segway scooters and iBot wheelchairs got the Deumites wondering if another breakthrough was possible.

“My thoughts were, ‘Boy, if someone could take the exoskeleton and combine the gyroscopic technology off of that iBot, then you’d really have a piece of equipment that would help all kinds of folks who had balance problems, people who have lost legs and are trying to learn how to walk,” Norman Deumite said. “With spinal cord injuries and head injuries, balance is one of the chief things you’ve got to overcome.”

Himself a mechanical engineer and LSU graduate, Norman Deumite was interested enough in the idea to provide $35,000 to sponsor “Walk Again.”

He has met regularly with the engineering students throughout the school year that was devoted exclusively to solving the balance problem.

“Sloan and I are both excited about working with these kids, and I’ll tell you something — these kids are something,” Norman Deumite said. “Man! I’m a mechanical engineer myself. I’m glad I’m not competing with this group of kids coming out of college right now, because they are so bright.”

After research that included input from a kinesiology instructor, the students decided not to use gyroscopes, but instead try to mimic human balancing motions as much as possible. They have created an exoskeleton frame that uses pressure sensors in two footpads to detect when weight is shifting too far forward, backward or sideways. The sensors are connected to hydraulics designed to make the appropriate adjustments.

“A lot of research, a lot of discussion, a lot of thought — a lot went into that decision,” Culotta said.

What they have built is not close to being a working model. The exoskeleton includes a bracket around the hip and ankle and hip joints. There are no knee joints because, Yates said, knees aren’t critical to balance, and that was this phase of the project’s sole concern. Knee joints will have to be added by future students whose task will be to modify the exoskeleton so it can walk, she said.

“I think the walking is more complicated, definitely, but you can’t do walking without balance,” said Marcio De Queiroz, an associate professor in mechanical engineering who is the project adviser. “It’s a prerequisite for walking.”

Norman Deumite said he knew going in that this project would take at least two or three years. His son is excited about the possibilities.