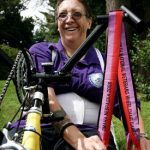 According to Kim Byers, spokeswoman for the event, 500 military-veterans-turned-athletes – including at least a dozen from Massachusetts – challenged themselves and each other in what has become the largest annual wheelchair sports event in the world.

“You feel like it’s a true Olympic event. Everybody is supporting you, and they want you to succeed,” said Rosemary Cahill, 53, of Yarmouthport.

The Air Force veteran was diagnosed with Multiple Sclerosis in 1991, and became wheelchair-bound in 2000 because of the disease. Cahill won gold medals in four events, including air-gun shooting, bowling, billiards and table tennis.

“If you put yourself in a rolling desk chair and try to play, it takes a lot of maneuvering of the body and stretching, along with eye-hand coordination,” Cahill said. “It’s therapy that becomes fun instead of monotonous.”

Air Force veteran Debra Freed, 50, of Framingham said the wheelchair games are “an opportunity to become unstuck” from disabilities. She won two gold medals in her class of air-gun shooting and handcycling.

“It’s amazing what the games can do for your psyche, especially for newly injured individuals,” said Freed, who suffered a spinal-cord injury and uses a wheelchair for activities outside of her home.

“The games were an opportunity to travel and do something that I’ve never done before in my life,even when I was able-bodied,” Freed said. “Having been in the military, there is a camaraderie of veterans and military personnel that I have yet to find anyway else. It turned into one of the best experineces I’ve had in my life.”

“I’ve been paralyzed for 11-and-a-half years but have been to 12 games,” said Ross who got involved in the wheelchair games shortly after his initial spinal-cord injury.

“We’re competitive amongst ourselves and we have a strong team, with great coaches,” Ross added. “It feels good, because I can compete against other quadriplegics on the same disbility level. It’s a blast, and we have fun. People clap if you’re doing well, or even if you stumble.”

What’s Next? In Limbo With Syrian Refugees Who Have Spinal Cord...