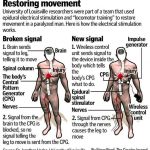 A team of scientists from the University of Louisville and two California universities have used electrical stimulation and rehabilitation to help a paraplegic man stand and take steps with assistance — a breakthrough with implications for millions of paralyzed people around the world.

Rob Summers, a 25-year-old former college baseball player from Oregon, was paralyzed below the chest after a hit-and-run car accident in July 2006. Now, he can now push himself to a standing position and stand for up to four minutes on his own.

He can also make repeated stepping motions with help, and voluntarily move his toes, ankles, knees and hips.

His success is the subject of a study published Friday in the prestigious British medical journal The Lancet.

“It opens up a whole new set of possibilities, not just for the just-injured, but those injured for months or years,” said the study’s lead author, Susan Harkema, a professor in U of L’s department of neurological surgery.

Harkema is a pioneer of “locomotor training,” which rehabilitation specialists used to help retrain the neural networks in Summers’ spinal cord to produce muscle movements so that he could stand and step. That training, combined with continual, direct electrical stimulation of Summers’ lower spinal cord, allowed Summers do something he never thought he would.

Researchers said this is the first time, to their knowledge, that this combined strategy of electrical stimulation and locomotor training has helped someone stand alone and move with help.

“I continue to make progress every day,” said Summers, who lives in Los Angeles and is one of the more than more than 1.3 million Americans with spinal-cord injuries.

“I’m very optimistic. My ultimate goal is to stand completely unaided and eventually to walk and run and try to play baseball again.”

Harkema’s study was showcased Thursday at a press briefing at the New York Academy of Sciences. Along with her position at U of L, she is also director of research at the Frazier Rehab Institute and director of the Christopher & Dana Reeve Foundation’s NeuroRecovery Network.