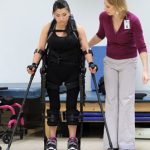 Stephanie Sablan was driving home from her grandmother’s house late at night last January, down the scenic Route 101 in Northern California. Sablan picked up her phone and typed a text message to her boyfriend to say she’d be there in half an hour. Before she hit send, she looked up and was surprised by a curve in the road. She swung the steering wheel to avoid the central reservation, but went too far, and the car flipped over – once, twice, three times, four times.

As the car tumbled, Sablan was thrown out of the passenger-side window – “I wasn’t wearing my seat belt,” she says – and landed in the grass beside the highway. “I tried to get up, but I couldn’t move my legs.”

Sablan, 24, is now paralysed from the waist down. But six months after the accident, she is walking again, with the help of a bionic device that interprets arm gestures to move the legs.

At a physical therapy session at Santa Clara Valley Medical Center, Sablan practises using eLegs, this new device. An artificially intelligent computer strapped to her back processes the intention of movements in her arms and sends a signal to the motorised braces on her hips and legs to step forward. In a swift movement, one knee bends and her heel lifts up and settles on the floor, almost as naturally as it did before her accident.

It will be at least another two years before people like Stephanie Sablan will be able to have a pair of eLegs at home, where the device’s designers hope it will enable people to perform normal daily functions, such as walking to the bathroom to brush their teeth, or to the car to drive to work.

The device was put through its first trials in San Jose this spring, and will roll out to a total of 10 rehabilitation centres across the US this year. Dr Akshat Shah, who is overseeing the study, hopes that one day he’ll be able to send his patients home with a set of electronic legs instead of a wheelchair.

“For spinal cord injury, we haven’t had a major breakthrough in 20, 30 years,” says Dr Shah. “This could be a game changer.”

The bionic exoskeleton was first developed at Berkeley Bionics – a robotics lab located about 90 miles north of where Stephanie Sablan had her car accident – by graduate students from the University of California at Berkeley. As the engineers fine-tune the software in eLegs, Berkeley Bionics’ chief executive Eythor Bender imagines an even broader range of uses – and markets – for exoskeletons such as these in the future.

“There are stroke victims and the ageing population,” Bender said. “Maybe there’s a simpler version of eLegs to help those with arthritis get around.”

Another device the company designed for the military, to help soldiers carry heavy loads, could be extended to firefighters or postal workers. “We look at ourselves as a company that is mastering the merger of the man and the machine,” Bender added.

At this stage of her rehabilitation, Sablan’s eLegs are used primarily to boost her strength. Walking in the device in a square around the rehabilitation centre constitutes a serious workout: her arm muscles flex, her breath quickens and the sweat builds up on her brow.

“Make-up!” she calls, in jest, her humour undimmed by her disability. Her mother brings a small towel and blots Sablan’s forehead as she catches her breath. As she adjusts her arms in the crutches to start again, the tattoo on her inner right forearm ripples over her tendons. “No pain … fight forever,” it reads in neat cursive.

These were the words Lady Gaga uttered in a voicemail message to Sablan the night before she tried eLegs for the first time. Yes, the Lady Gaga. Sablan is a huge fan, and when her friends saw the iconic rock star in concert the night before Sablan’s eLegs trial, they persuaded Lady Gaga to call Sablan to wish her luck.

The tattoo is the latest of six Sablan has had. She gets one every year on her birthday, to commemorate what she’s been through the previous year. The notion of fighting for ever seemed appropriate when she turned 24 in March, a couple of months after losing the use of her legs, and a couple of weeks after learning to use them again with eLegs.

“To just be standing up and not sitting down is pure bliss,” she says.

Never walk again? Yes, he did