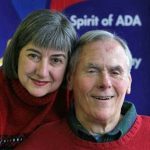 During one especially cold morning in January of last year, a disabled man who uses a wheelchair and ventilator , and his wife were heading for their office in the 100 block of South 11th Street in downtown St. Louis. They were accosted that morning by a woman, standing outside the building, smoking a cigarette.

She wanted to know why in the world a man in a wheelchair would be out in this weather. She wasn’t placated by the obvious response from the man’s companion that he, like many other St.Louisans, was simply on his way to work. It apparently didn’t occur to the woman that some severely disabled people work every day.

Nor did she realize that the man dressed in warm clothes and on the ventilator was Max Starkloff, a nationally known disability rights leader who went to work daily until he died last December at age 73. He and his wife were on their way to the Starkloff Disability Institute, which they founded years after they created Paraquad, an organization that became a national force for the rights of the disabled.

Colleen Starkloff used the story about that encounter with the woman to stress that biased and paternalistic attitudes toward the disabled remain an unfulfilled challenge of the Americans With Disabilities Act, which was signed into law 21 years ago this week.

“The ADA has had a tremendous impact on our society, but people’s attitudes toward the disabled are not where they need to be,” she says. “Attitudes still need to change. When they do, we’ll experience the full promise of ADA of equality and independence for all people with disabilities.”

She says Missouri has taken good steps on a number of fronts to change attitudes. One is a current History Museum exhibit, inspired by Max Starkloff, that focuses on ADA activities during the first two decades of the law. Colleen Starkloff also notes that a disability studies program has been set up at Maryville University.

In addition, she points to this year’s new state law that designates October as Disability History and Awareness Month. The legislation gives school districts the option of providing instruction on topics relating to individuals with disabilities. The designation is included in HB555, one of two pieces of disability legislation that Gov. Jay Nixon signed less than two weeks ago. The other is HB648, which, among other things, gives disabled parents more protection on matters involving foster care licenses, adoptions and parental rights.

In signing HB648, Nixon noted that the Starkloffs had to fight many battles when they decided they wanted to have children. He said some adoption agencies rejected the couple because of Starkloff’s disability stemming from a spinal cord injury.

“But they persisted — as they did on everything that mattered deeply in their lives — and eventually adopted three children,” Nixon said earlier this month when he signed the two bills.

While pushing for the two House bills, the Institute and officials at Paraquad said they were pleased that the governor vetoed SB 188. Some groups had argued that SB188 would have would have weakened workplace protection for people with disabilities. Starkloff and officials at Paraquad say employment for the disabled was one area that needed more attention. Two of every three disabled persons are are said to be unemployed, Starkloff says. She adds that some work part-time because they don’t want to lose certain benefits, such as Medicaid, which is affected by income.

Kirsten Dunham, public policy director at Paraquad, joins Colleen Starkloff in arguing that another big challenge centers on policies of inclusion for people with disabilities.

“I think we have seen a lot of progress in access for the disabled,” Dunham says of ADA. “More attention is paid to new buildings being accessible. Attention is paid to sidewalks and curb ramps being accessible. But one of the future ADA issues is going to be making sure states are not segregating and isolating people with disabilities instead of providing them with support and services to make them fully included in communities.”

Starkloff decries what she says is a tendency to push “the disabled into an institution because you need help with bathing, dressing, or getting out of bed. You can have those services outside of an institution and inside your home. That’s a long fight we haven’t won yet. It’s the key to independence and quality of life of people with disabilities.”

One topic that makes Starkloff beam involves how the built environment has changed as a result of advocacy and ADA. She cites City Garden in downtown St. Louis as an example.

“We promote the concept called universal design in the home and the community so that people with disabilities can be fully integrated with non-disabled people,” Starkloff says.

“City Garden is a design that works for everybody. There are texture changes so people who are blind or have low vision can keep on the path and know when the path changes. You can reach and touch the art work. The water feature is flat, so you can get wet in your wheelchair and play in the water with your kids.”

By Robert Joiner, Beacon staff
Contact Beacon staff writer Robert Joiner. Funding for the Beacon’s health reporting is provided in part by the Missouri Foundation for Health, a philanthropic organization that aims to improve the health of the people in the communities it serves.