The hunt for a cure 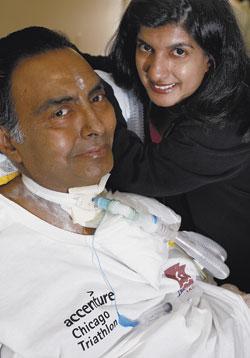 SCHERERVILLE | Malini Goel, 34, looks to her father as an example of an ordinary person conquering extraordinary obstacles.

Nearly a year ago, Dr. Arun Goel suffered a momentary lapse of consciousness and fell onto a space heater, breaking his neck, his daughter said. He is paralyzed below the shoulders and relies on a Ventilator to breathe. Even the smallest tasks can be a Herculean effort.

“I see what my dad is able to do every day and how hard it is just to do little things,” said Malini Goel, whose father has inspired her to undertake a grueling physical challenge.

Goel said she hopes to raise at least $50,000 for spinal cord injury research through the Christopher and Dana Reeve Foundation by running in the Chicago Triathlon on Aug. 26.

The foundation’s focus is finding a cure for spinal cord injuries by funding research and improving the quality of life for people living with paralysis, according to its Web site, www.christopherreeve.org.

“A cure can’t be far away,” Goel said, smiling at her father.

The family has struggled to overcome the drastic life shift of paralysis, including hefty medical bills and battles with insurance.

Goel said she also wants to raise at least $5,000 for the Leukemia and Lymphoma Society, an organization supported by the group she is training with called Team in Training.

“It’s in our hearts,” she said. “We know people and have family affected by cancer.”

Goel has raised $11,000 toward her spinal cord injury goal through donations and pledges.

The dual Schererville and Chicago resident said she isn’t a runner, swimmer or triathlete, but she believes in giving back and wants to contribute.

Goel remembers sitting with her father as he struggled to speak. He told her she doesn’t understand that it hurts for him to talk because of the ventilator.

Goel has four months of training ahead, six days a week for increasing amounts of time and difficulty.

Still living life to the fullest