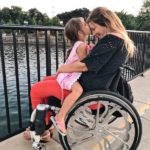 It’s been eight years since the night of Rachelle Chapman’s Bachelorette party where a playful push into a pool left her quadriplegic.

Since then, Rachelle became a wife, starred in a TLC television show, joined a quadriplegic rugby team and became a mother.

“I literally don’t know what I did before I was a mom,” Chapman confessed. “She’s so entertaining.”

Chapman has set out a new venture- blogging. She uses the blog to share her journey as a quadriplegic and advocate for others with similar conditions in writing.

Rachelle’s blog bares it all. It’s her space of the virtual that answers questions she’s frequently asked through social media.

Many wonder how a Chapman qualifies as a quadriplegic. She still has the function in her arms, despite and fingers lacking motion. “What many people don’t realize is there are so many different levels of a quadriplegic. All that means is that there is impairment in four limbs,” Chapman explained.

She also dives into other frequently asked burning questions, including sexuality as someone with a spinal chord injury. “There’s a negative stereotype when it comes to beauty and sexuality. No one wants to ask the questions, so I write about it.”

Her Instagram account alone shows thousands of followers. Chapman said shes had several posts go viral. “I love being a voice for the community. I wish more people have the following that I have so there could be more voices.”