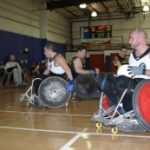 Anyone who has seen the 2005 documentary Murderball knows that the sport of quad rugby is intense. It is a 4-on-4 full-contact sport played by athletes who navigate the court in specialized wheelchairs. The rules are similar to those of traditional rugby, but instead of running around an open, grassy field, the players fly around a basketball court in technically advanced wheelchairs, attempting to carry the ball across the opponent’s goal line.

The violent, and entertaining, aspect of traditional rugby is maintained. Players are constantly colliding with each other, often with such tremendous force it can lift competitors’ wheelchairs completely off the ground.

The Jacksonville Ice and Sportsplex hosted this year’s Brooks Rehabilitation’s 5th Annual Southern Slam Quad Rugby Tournament. As participants and spectators entered the complex, Amanda Osbourne greeted each person,displaying her passion for the sport and, more importantly, its impact on the lives of the players.

“These events are completely free to the public,” Osbourne said. Each wheelchair is specifically designed for quad rugby and can cost up to $5000, but Brooks Rehabilitation provides funds to help athletes. “The funding from Brooks allows everyone to participate. That way, it is not based on their financial ability,” said Osbourne.

Alice Krauss, occupational therapist and manager of the Adaptive Sports and Recreation Program found that many of her patients became overweight or depressed after being discharged. She sought to create an adaptive sports program to meet the needs of such patients.

“I am a die-hard occupational therapist,” Krauss said. “Every second of my time in the adaptive sports program goes towards improving the physical, emotional, social and spiritual needs of these athletes.”

It seems counter-intuitive that such an aggressive sport is physically, emotionally and spiritually healthy, but quad rugby provides athletes with a source of recreation and a medium for athletic dedication.

“These people are natural risk-takers; this sport merely removes their disability and gives them an outlet. Just like if you and I choose to take up cycling, there is still the chance of us getting injured,” said Krauss.

“The vast majority of players have some sort of spinal cord injury, some have brain injuries,” said Krauss, “but people with other conditions, such as multiple sclerosis and cerebral palsy, are also welcome to play.”

The Brooks Bandits is the name of the local team. On their roster, they have 16 players, all of varying ages and walks of life.

Off the court, Terell King, 28, is laid-back, charismatic and often finds himself surrounded by young ladies. At the age of 25 he suffered a gunshot wound, which left him in a wheelchair. He joined the Bandits this past summer and is passionate about the sport.

“They told me to come try it out. I got in a [quad rugby] wheelchair and I never got out of it.” King said.

Handsome, intelligent and polite, Dillon Ford, 14, is not only the youngest player on the team but the youngest player in the entire league. He has been a Bandit for over two years and participates in a long list of other sports offered through Brooks, including water-skiing, surfing, rowing and bowling.

“Anybody who has problems, who can’t do sports standing, should try the sports that Brooks offers,” says Ford.

Every week, Brooks has around 16 events, which are all open and free to the public. The next official quad rugby event is the Summer Slam in August. For information about other adaptive sports events, including a popular surfing tournament in early June, go to www.brooksadaptivesports.org.